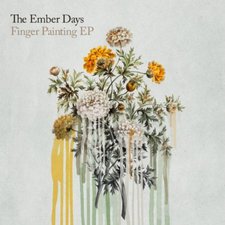 Thanks to indie record label Come&Live!, bands that were once so obscure that the average music fan wouldn't recognize them are now finally able to see some sunlight. Preson Phillips and so long forgotten are examples of bands that have seen a bigger fanbase since their signing to the label (partially due to the fact that all Come&Live! music is free). Another great example is the worship band The Ember Days. Their first full length, Your Eyes Light Up from 2007, didn't get much attention, but they released their follow-up self-titled EP through Come&Live! and now more people know about them than before. It's been about two years since they've put out anything new, and after spending some time in the studio this year, fans will get the Finger Painting EP on August 31 - free, of course.

Finger Painting has five tracks, only two of which contain lyrics. The first of which is called "It Is Well." Janell Belcher's vocals are as beautiful and powerful as ever, complementing the acoustic-structured song perfectly. Not to mention the instrumentation of the song displays the band's chemistry and shows a great deal of maturity in their performance and songwriting capabilities. They were amazing before, and they're getting better. Oh, and no, it's not a remake of "It Is Well With My Soul," though "It is well with my soul" is the entirety of the song's chorus. The other track that contains lyrics is the EP's closing song, "Simple Song." It starts off slow for a minute and a half, with Janell singing, "Simple song, singing hallelujah, praise to the One who loves us," and then escalates into almost a pop/punk style song, reminding me of "Shine" from their self-titled EP. It really is a simple song, though only lyrically. Those lyrics are repeated a few times, then the rest of the lyrics consist of "Hallelujah, we praise You, hallelujah," then it triumphantly ends with the repeating of "Hallelujah," without so much as being overbearing at all. Musically, it's brilliantly orchestrated, with a beautiful string section and terrific drumming.

The other three tracks are instrumentals. "Hope" gets us started very slowly, and as it progresses, everything starts picking up. The drums slowly get louder, as do the guitars and the strings. The latter half of the track also adds some bells to the equation, but then we're left with the bass and rapid tapping of the snare drum for the last thirty seconds as a bang on the toms signals the end, just in time for "It Is Well" to start. "Rest" takes a couple minutes to pick up, but the music is pretty, and it actually even features some harmony from Janell (and a faint hint of male vocals, most likely from Janell's husband/lead guitarist Jason Belcher). It transitions directly into the third instrumental, "Finger Painting." The eleven-minute length was a little intimidating at first (and it worried me a bit, as most lengthy instrumentals don't usually keep my attention). "Finger Painting" doesn't really just drag itself along, though, and it's easy to find yourself getting lost in the rhythm (which was the band's intention, along with setting an intimate mood for spending time in prayer). The band actually shines in this track, and once again I find myself very impressed with the drumming as it skillfully goes back and forth between somber and intense according to the music's demands.

As good as everything is on the Finger Painting EP, the music fan in me can't help but feel not thorougly satisfied. It might sound like a bad thing, but really, in this case, it's good. Finger Painting is somewhat of a prelude, for The Ember Days actually have plenty more songs to be released sometime early to mid-2011, for their first full-length in four years. This EP has successfully given us some amazing music AND given me an appetite for that full-length record. If you're new to The Ember Days, expect lush and organic music comparable to The Glorious Unseen. You can get Finger Painting for free through Come&Live!, but honestly, it's well worth the price of purchasing it.