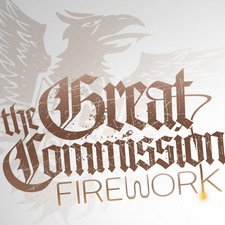 Mixing hardcore and Christian praise seems like a paradox to the ears of mainstream Christian music. Nevertheless, The Great Commission on Ain't No Grave Records is reaching into the Christian mainstream with a new EP called Firework. They are joining other hardcore acts like Demon Hunter and Wolves at the Gate who enjoy playing a softer sound every now and then.

From the beginning, Firework is remarkably different from The Great Commission's previous albums. The first track, "When It Rains It Pours," starts off Firework strong, with tasteful gang vocals and energetic rhythms. Angela Razo's vocal work is a big plus and stand out on the EP. She balances very nicely with Justin Singh and Victor Cota's vocals throughout the entire EP. However, when the next track, "Draw The Line," plays, your ears will deceptively tell you that it is a continuation of "When It Rains It Pours." Most of tracks on Firework lack identity and sound like one continuous song. The lack of uniqueness can mostly be attributed to the overuse of gang vocals, which appear in almost every single song. This repetition creates an unintended connection between each song.

The strongest song on Firework is "Weight of the World." The entry guitar work is fantastic, following up with an entertaining first verse that pulled me in immediately. The harmonization between Justin, Victor, and Angela is solid as they reminded me of Christ's eternal love and power in all situations, "I know that you are always with me. Forever. Even till the end of the age The weight of the world is on my back." The vocal patterns are tight and thoughtfully structured. One sour point was the use of gang vocals that sounded distracting and out of place.

To not drift too far from their hardcore roots, "Firework," a cover of Katy Perry's original, is the last song on the EP and is hardcore through and through. I could do without the first 30 seconds, but the chorus and bridge are very fun, with a tasteful use of double bass and deep screaming. "Firework" is an interesting way to end a soft album. Either way, it was a good reminder that The Great Commission typically writes hardcore music.

If New Found Glory ever wrote a Christian album, it would sound similar to Firework. The Great Commission's move in to the lighter side probably required a simpler sound, but Firework is quite repetitive and I quickly lost my interest between each track. The Great Commission accomplishes their main goal in bringing listeners closer to God with the use of a comparatively heavier sound. The lyrics are inspirational and encouraging, however, the transition to a softer sound is average and won't blow your socks off.