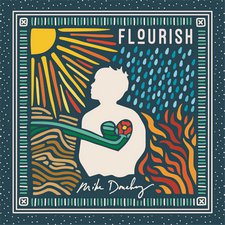 
The solo album by a beloved band's lead singer has been an event ever since the dawn of rock and roll. Soul singer Van Morrison first had a few hits with the Irish garage band Them that sound almost exactly like his solo work of the last fifty years. Sting's unique voice and songwriting style closely mirror his music made as front man of The Police, while any Mac Powell solo outing sounds like Third Day, no matter the change in the music.

And so it is with Tenth Avenue North's lead singer and biggest personality, Mike Donehey. In the wake of that band's amiable retirement last year, Donehey has flexed his solo skills with a number of EP's, and now his first full album release, Flourish.

For all the noise and hype that going solo produces, Flourish sounds a great deal like Tenth Avenue North, and that's to be expected as a first go round. It's also just fine, as that band found the common ground between being creative and accessible at the same time (and tuneful to boot). Donehey has always had an easy way with a melody, and Flourish is stocked with great songs that fit the space between inspirational and thought-provoking.

Lead single "All Together" is an uplifting slice of pop that throws in a gospel choir, electronic drums and a fantastic set of lyrics that beckons the church into living in the way that we're called to: "No more playing Mr. Nice Guy / I'm done pretendin' that I'm alright / I fake a laugh, keep actin' upper class / Like I've never had a struggle in my whole life / oh, can I tell you the state I'm in? / (Ooh, ooh-ooh) cracks are where the light gets in / Maybe we don't have to have it all together / What if grace made it safe to tell you the truth? Oh / Maybe we can make a shelter for each other / Turnin' lies into light and we'll make it through / All together, all together / Love keeps our broken pieces all together".

Donehey has never been shy about his role as a musical minister with a lot to say, but few say it better that he does. While the lyrics of Flourish may be meat and potatoes on some levels, Donehey has always had a plainspokenness that has resonated with listeners for many years now. The earnest "Glory I Couldn't See" is a prime example of this. As an ode to the wonders of domestic life that easily pass us by, the song delivers an old theme on a refreshing spiritual and musical level: "I want to hear Heaven when my daughter laughs / And feel the / Spirit every time we dance, when we dance / She always wants to dance / 'Cause I've been busy, been making plans / I have a way of living in my head, in my head / I'm outside looking in / But I'm waking up / I've lost too much / I'm waking up / To every sunrise / And every night sky / To the magic that's right here waiting, but I've been asleep / There's glory that I couldn't see."

While nothing on Flourish travels too far from the musical homeland of his former band, Donehey has threaded the needle between familiarity and artistic growth quite skillfully. And in doing so, he has delivered an album that is one of the best things you can say about an artist - it's a welcome return.