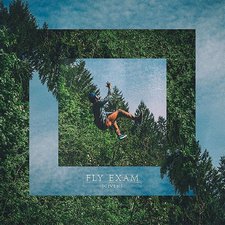 
Las Vegas native JGivens first caught my attention with 2013's El V Envy, and he has killed it on so many tracks as a featured artist recently that I could not wait to see what the Humble Beast representative was going to pull with Fly Exam. Starting off this thirteen track ensemble is "Ignoranto," and not only are the beats on point, but the lyrics are clever: "If I was you, I would be my favorite rapper and my favorite rapper's favorite rapper - the rapper every rapper's afraid to rap after." It's a great start to what proves to be a solid album featuring what JGivens is known for: creativity and hip hop that is outside of the box. Such examples would be the euphoric production heard on "Butterfly Stance" and the title track that sounds like a cocktail of modern hip hop and a 1980's outerspace movie soundtrack. J keeps it fully creative, but still manages to keep most tracks on point and they come out well.

The Humble Beast artist also kills it when it comes to his music videos, as can be mostly appreciated in "Super Lowkey" and "10, 2 Get In." The latter is a first-of-its-kind, featuring a 360-degree camera typically used for virtual reality. Not only does the track have awesome flow, but the video is off the chain. Not only do most songs on this album carry superb beats and great lyrical flow, but the featured artists such as John Givez, Odd Thomas, and Propaganda make this for a more complete album. Now, not everyone is going to appreciate the uniqueness of JGivens as he might be more of an acquired taste. As for me, this is one album I will be playing for a long time to come. Also, as always, any Humble Beast release is completely free to download from their site and, thus, you have no excuse to not check this out!