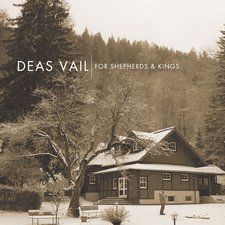 Deas Vail released their split EP with Farewell Flight in June, but the EP was only a prelude to the band's self-titled release in October. Now, to cap off an eventful and solid year, the group's final offering of the calendar comes in the form of a four-song Christmas EP, For Shepherds & Kings.

I'm typically not that big of a fan of the more contemporary Christmas song "Do You Hear What I Hear," but Deas Vail pulls off their version of the song well. Their indie pop flavor makes the song stand out, and the vocals and the bridge music are almost magical. "God Rest Ye Merry Gentlemen" is a likable, upbeat tune that features a folk feel. Wes Blaylock's lead vocals, some background vocals during the chorus, and an acoustic guitar provide more of the sound for "O Come, O Come Emmanuel." The classic song works and is a good addition to the EP, but the track isn't by any means overwhelming. Deas Vail offers a slightly altered lyrical version of "Coventry Carol," a piece centering on Matthew 2:16-18, the account of the aftermath of Herod's plan to kill the infant Savoir. The lyrics themselves are bleak and Deas Vail's melancholy music is equally haunting.

Although "Coventry Carol" is not necessarily a Christmassy song per se, the rest of the EP is a well-rounded selection of classics made memorable by Deas Vail's indie style. For Shepherds & Kings is a good group of holiday tunes that is hopefully a precursor to a future, full-length Christmas project.

Deas Vail's Christmas EP, For Shepherds & Kings, accurately reflects their signature style, even if it feels a bit underwhelming in the end. "Do You Hear What I Hear?" starts the EP with the strongest track, implementing the usual impressive vocal harmonies in the process. "God Rest Ye Merry, Gentlemen" is performed exclusively (and unexpectedly) with a ukulele; the song employs a straightforward approach, but it's short and to the point. "Coventry Carol" is an uncommon choice for the third track, but it exposes Deas Vail's creativity accurately and gives more character to the project, and the completely acoustic "O Come, O Come Emmanuel" takes the EP to an unpolished, but serene, finish. Not much on For Shepherds & Kings' four tracks is sub-par or problematic, but it doesn't differentiate from their other material very much and tends to sound less "Christmas-y" than it probably should. Execution aside, it's also twelve minutes of haphazard material that begs to be delivered in a more organized and purposeful manner. Perhaps down the road the quintet will expand their repertoire of Christmas material into a fully-realized album ripe in yuletide spirit (of which the band is fully capable), but at the very least, For Shepherds & Kings is a great start that's worth looking into this season. - Review date: 11/28/11, written by Roger Gelwicks of Jesusfreakhideout.com