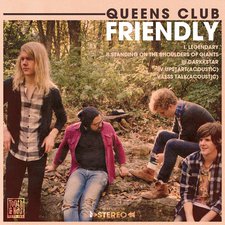 Tooth & Nail dance/rock act Queens Club got started on the label with fairly positive reviews for their debut EP, Nightmarer. It left listeners anticipating their first full-length project. But upon the album's arrival, it became a different story. Young Giant left a bad taste in the mouths of not only fans, but critics alike, with considerably low ratings all across the board. Recently on Facebook, the band put up a new EP called the Friendly EP, which they gave away for free in exchange for "liking" the page. And thankfully, Friendly EP may have been just what we needed from Queens Club.

Of the five tracks, two are new songs from the guys. EP opener "Legendary" is one of them. It's a fun and energetic pop punk track in the vein of a not-as-well-produced, but more rock-tinged, Jonezetta. The hook is really catchy, needing only to have the vocals turned up a bit. The other new track is "Standing on the Shoulders of Giants," which happens to be the next song on the tracklist. It focuses a little more on their rock sound, and quite a bit more on an indie sound in the song's verses. "Darkkstar" is a song originally released on Queens Club's independent EP, Uh Huh! It's a fast-paced rocker that is straight to the point, lasting less than two minutes. With good guitar work, it's definitely one that would work up an audience. Speaking of good guitar work, you'll also find it in the acoustic rendition of "Upstart" from Young Giant. It's pretty tame, especially compared to the preceding song, "Darkkstar." The guitar licks in the hook are absolutely irresistable, though I could do without the really obnoxious, high-pitched, semi-whiny vocals. Throughout the rest, though, the vocals sound really good and clean. To close the Friendly EP is another acoustic song, this time a rendition of "Less Talk," also from Young Giant. It's much slower than the original, bearing a slight folk nature; not the vocals so much, but definitely the quiet drums and strumming of the guitar. Of the two acoustic songs, "Less Talk" is weaker, but it's not bad.

I'm not entirely sure what the purpose of this release was. Was it a prelude to another album already? Just a treat for fans? Or perhaps they just felt like recording them and ended up being really proud of them. Whatever the case, it's kinda cool. While I haven't been much for Queens Club's music thus far, Friendly EP is a rather decent release that may change my mind whenever their next release comes out. I might not have paid for Friendly, but it's not too much trouble to "like" their Facebook page to get it. If Young Giant turned you off, check out this new EP and see if maybe it will change your mind as well.