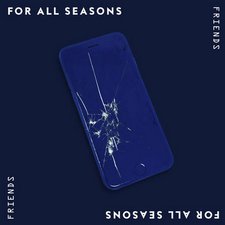 For All Seasons
Friends - Single


From the opening count-in, kick drum, guitar lick, and declaration "Crazy!," For All Seasons' latest single, "Friends," is pure joy. I can almost guarantee that you'll have a smile slapped across your face for the whole three minutes and thirty-six seconds -- that is, unless you realize just how honest, sad, and real the lyrics are, albeit juxtaposed against a backdrop of dance-pop reminiscent of The 1975, Walk the Moon, and Pale Waves.

"Friends" is the third single released by For All Seasons in 2019, as they continue their unique journey of releasing one single per month, alongside podcast episodes, music videos, and fan interaction for each song. (For more information about what the band has in store for 2019, listen to their interview on the JFH Podcast). Of the first three songs, "Friends" is the boldest tune yet, one that will force listeners to rethink their definition of For All Seasons, especially anyone who had them boxed in as just another CCM/modern worship act.

In fact, "Friends" might nearly be risky in that regard, as it's a straight-up pop song that doesn't even mention God. Nevertheless, the ridiculously catchy and danceable tune is drenched in the hard-earned wisdom of Scripture, especially the verses in Proverbs about friendship (e.g., Proverbs 18:24, "A man of many companions may come to ruin, but there is a friend who sticks closer than a brother.") Ironically, the song is as much about loneliness as it is friendship, and it gives us the necessary reminder that we were not meant to live this life alone, nor can we.

It's hard to imagine For All Seasons releasing a song much better than this during the next nine months, but then again, merely three months in, they've already proven that they're willing to do anything within the realms of CCM, pop, rock, or corporate worship. Within that range, and bolstered by the talents of a legitimate and serious rock band, we'll just have to wait and see. (In the meantime, don't forget to follow the band's More Than Music podcast to get a behind the scenes look at each single, with insights that are in turn musical and pastoral, entertaining and convicting.)