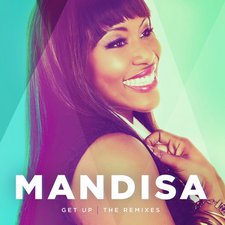 Mandisa
Get Up: The Remixes


Remix albums are, at their very core, daunting propositions. On the one hand, those in the more conservative camp prefer any such undertaking to retain enough of its source's underlying rhythm and tune to guarantee that the redone record bears at least some semblance of recognizability to its original counterpart. Then, of course, there are the purists who feel that the underlying quality of any remix effort is directly proportional to how far afield it flies from the raw materials from which it was created.

As is the case with most undertakings of this sort, the results for Mandisa's Get Up: The Remixes tend to be a bit all over the map. On the negative side of the coin, the infectious melody lines and joyous funk-filled grooves that vaulted "Shackles" and "Ovecomer" to their lofty, near-transcendent pop/soul perches are all but stripped away by their newfound sterile embellishments. The more staccato-laden groove of "What If We Were Real" and punchier rhythm applied to "Waiting for Tomorrow," by comparison, actually render those tracks superior to their forebears in terms of both immediacy and grandness. By and large, though, the remainder of the release is filled with numbers like "Joy Unspeakable," which are pretty much a wash, coming in no better and no worse than their predecessors.

Remix projects, with their emphasis on syncopation and beat, arguably work best, in terms of new facets and interesting detours, when the performer in question isn't dance-oriented to begin with, which, to be fair, makes an artist like Mandisa a slightly more challenging candidate when it comes to tweaking her tunes. Unfortunately, this turns out to be the case here. While there are certainly one or two true gems to be harvested from the proceedings, with very few exceptions, Get Up: The Remixes ends up playing out like a far-lesser cousin to the four albums from whence its songs were taken.

Mandisa has proven herself to be a Christian pop song hit maker. Since her debut album, True Beauty, she has had many big hits on the Billboard charts. Her biggest hit, "Overcomer," spent over five weeks at number one and that song, and album of the same name, both won Grammys.

The album Overcomer also saw Mandisa venture into more dance-pop territory. Songs such as "Joy Unspeakable," "Face 2 Face" and "Back To You" were more electronic than songs on her previous albums. Now Mandisa has put together a full-on dance album with Get Up: The Remixes, and it's amazing. Having some remixes done by popular DJs and producers, such as Capital Kings and Neon Feather, this album will really help you to get on up and dance.

Get Up: The Remixes does have some more EDM remixes, but some of them still are more dance-pop. I personally wish some of the remixes were deeper electronically, but that doesn't mean it detracts from this album--it's more of a personal preference since I love a lot of drops.

Conclusion: If you're looking for a great remix album with some of your favorite Mandisa songs given a whole new sound, then I definitely recommend Get Up: The Remixes.