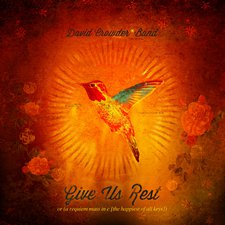 It is sad to bid farewell to a good friend. Sometimes that same difficulty is shared with saying goodbye to your favorite band. When the David Crowder*Band announced that their newest release, Give Us Rest or (a requiem mass in c [the happiest of all keys]), would be the conclusion of DC*B, it surely broke more than a few listeners' hearts. Nevertheless, their final curtain call also created a large amount of anticipation amongst fans. There is no doubt that they have created something grander and more elaborate than all of their previous releases: two discs and thirty-four tracks back up this statement. And from track one to thirty-four it is nothing short of an amazing experience.

Continuing the theme of A Collision, Give Us Rest deals with death and grief. It doesn't glorify the pain and sadness but the transition from this life to the next and calling on the Lord through our pain. Beginning the journey in a similar fashion to its counterpart is "Requiem Aeternam Dona Eis, Domine." There is no music, no poignant lyrics, only footsteps and the voice of a priest speaking in Latin. Within the last few seconds, a soft piano enters into the quiet atmosphere to transition to "Give Us Rest." With a mournful overtone the song laments, "O great God, give us rest Have you seen this place, it's all a mess... Shine on in, bring these to dead bones to life." However, the overwhelming beauty begins to grow and declares that God does shine on us and bring us to life. "Come Find Me" builds off of this as Crowder sings of being brought to life. Musically, it contains a wonderful combination of acoustic and electronic elements, all the while not overdoing one over the other. On the other hand, "God Have Mercy" works the electronic sound full force and executes it with much delicacy. Listeners who began following DC*B after the release of Church Music are sure to appreciate this, however, it does not resound throughout the album.

Listeners who enjoy the original sounds of DC*B are sure to get their kicks from "Fall On Your Knees," "Let Me Feel You Shine," and "After All (Holy)." Each carries the ability to be used in a corporate church setting and for private worship as well, which is an excellent feat to achieve. However, for those who enjoy the experimental, theatrical and all-around different sounds that the band has delivered are sure to have a blast with the "Sequences." Each sequence contains a different style of music that is almost out of character for DC*B, but because of their knack for diversity, it's what makes it just like them. This portion, honestly, contains elements of death metal, gothic choirs, epic orchestral arrangements and blood curdling rock. Nevertheless, a true standout is the peaceful "Sequence 4;" the minimal amount of music and the beautiful lyrics simply saying, "God you came. My God you came down," make the song intimate, affectionate, and truly a gem amidst the art.

"Oh My God" and "I Am A Seed" are fraternal musical twins. They are united by a similar refrain but are very different in translation. The former begs for God to come near and to set us free, while the latter recognizes the freedom and knows that we're growing in the Lord. Also uniting them is the fact that they are rooted in bluegrass music--as are the wonderful tracks "Oh, My God I'm Coming Home," "Leaning On The Everlasting Arms/Tis So Sweet To Trust In Jesus," and "Jesus, Lead Me To Your Healing Waters." These are perhaps some of the most musically, lyrically and spiritually rich songs released by the band. Their faithful yet free interpretations of some classic hymns attest to their delicate care of music. Listeners who tend to not be drawn to that sound might find themselves toe-tapping along and wanting to buy tickets to the next Bill Gaither concert. If any band can sway someone to increase their appreciation for different genres of music, it will definitely be these guys.

On what may sound like a sour note, some people may be put off by the short interval tracks littered throughout the album, however, I propose that these actually give the album great depth and make it more than just music. Whether the track is someone speaking or just a gut-puncher of music, it opens the listener to the experience rather than it being just pleasant sounds coming out of the speakers. Thus, the sour note is rather a very positive revelation. On your first, second and third listen, don't skip them; make sure to listen with open ears and open hearts.

Concluding the album is the simple "Because He Lives." There are no explosive drums, no climactic guitar solos, no phat bass lines, no awe-inspiring vocals; just a group of saints singing to Jesus, thanking Him for living. This is a true testament to who the band really is: a group of Christians that just want to worship their Savior. What could make it better? Nothing.

As stated earlier, it's sad to say goodbye to your friends. Over the years, the music of the David Crowder*Band has made them more than just a band to many listeners; they have given us music that unites us in worshiping Jesus Christ. The Bible says that Elijah the prophet never died but that he was taken away in a chariot of fire. The same could be said today of our friends in the David Crowder*Band. We all get to witness something glorious during their departure. We'll miss you DC*B.

The end of David Crowder*Band has sadly arrived. The band's final release, Give Us Rest or (Requiem Mass in C [The Happiest of All Keys]), is one of the most anticipated albums of 2012. However, with great anticipation comes great expectations. Is Give Us Rest the best worship album of all time as so many fans expect? The short answer is "no." Do not let this answer dismay you though; this album is a masterpiece. The 34-track outing is the most diverse thing DC*B has released in one collection. The album contains everything from the standard DC*B modern alt-worship you're accustomed to, as well as classical sounding pieces, shredding guitars, folk, bluegrass, a hint of southern gospel, and a couple nicely covered hymns. Crowder even saw fit to revive a time signature that has long been dead in modern music as "Blessedness of Everlasting Light" features a 3/4 rhythm. Tracks like "Fall on Your Knees," "There is a Sound," and "Oh, Great Love of God" are a few of the project's best songs and feature your typical DC*B sound. "Leaning on the Everlasting Arms" has a bluegrass feel and is another great listen, while "Jesus, Lead Me to Your Healing Waters" has a southern gospel feel, but somehow still seems to work for Crowder. In addition, the "Sequence" tracks on the first disc are mostly instrumental, featuring everything from soft pianos to much edgier music with killer guitar solos. With all of these glowing comments, why isn't Give Us Rest the best worship album ever? Simply put, it just doesn't contain enough sing-a-long type songs to make a very effective worship album. There is something to be said about the beauty of it all, though. A few wasted tracks of noise, filler, or spoken word keep this album from the perfect rating it was so close to. While I cannot see a person as passionate as David Crowder never making music again, if this is indeed the final release in the band's career, it is a more than worthy send off. You will be missed, DC*B. - Review date: 1/9/12, written by Michael Weaver of Jesusfreakhideout.com
class="coversize" align=right>
Early Thoughts...

In a 2009 interview with David Crowder, he warned listeners of what was to come next from the fellas in DC*B. (You can read that interview here.) Crowder stated that their albums were all relatives: Can You Hear Us? is related to Remedy, Illuminate is related to Church Music, and A Collision to the next album. Sadly, no one foreknew that the next LP would also be the final offering from the beloved David Crowder* Band, but regardless, the idea of something resembling the theatrical masterpiece of A Collision was intriguing. The final album from DC*B proves firstly that Crowder was not lying and secondly that they saved the best for last. Give Us Rest or (a requiem mass in c [the happiest of all keys]) combines all elements of music: bluegrass, pop, hip hop, industrial, metal, classical, traditional choral arrangements, etc. It is a melting pot of artistic expression and at the center, a heart of worship. Expect from beginning to end--a whopping 34 tracks--to not just be listening to music but experiencing something divine. Start 2012 off right by getting the final album from the David Crowder* Band; you won't regret it... - PReview date: 12/16/11, written by Ryan Barbee of Jesusfreakhideout.com --->