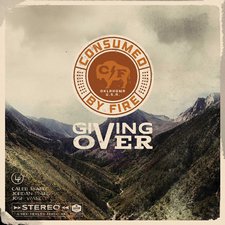 Consumed By Fire
Giving Over

Rock and roll and brothers have quite a history. From Needtobreathe, Switchfoot, Chevelle, and Kings Of Leon to Dire Straights, Credence Clearwater Revival and The Allman Brothers Band, brothers have been a cornerstone in rock music. Maybe it's shared passion or just necessity or convenience, but there is something intangible and chilling about the harmonies that family can make.

New Inpop signees Consumed By Fire follow this tradition nicely, with the three Ward brothers harmonizing up a storm on their major label debut, Giving Over - a great slice of southerner harmony and soulful songwriting.

Opening with a sprightly whistling intro, lead single "Lean On Me" piles on the soul and funk, and while treading closely to that other uplifting song bearing that same title, scores a winning mix of heart and delivery. With a sound right out of the Needtobreathe catalog of gravely vocals and soulful harmonies, "Lean On Me" adds a soul music wall of horns to take the tune over the top, and proves to be a great album opener.

The following "Thorns And Sorrows" brings the down-home stomp of Mumford & Sons, with a great pounding drum line and infectious gallop of acoustic instruments. Similar in structure to MercyMe's "Greater," "Thorns And Sorrow" is a potential radio hit waiting in the wings. Third song "He Waits For Me" builds its tension slowly with a Gospel music sway and mournful harmonies, and the slow build pays off with a aching song about finding the Lord's presence in quiet places. This quiet, yet epic song is worth the price of admission. "Learning To Love" returns to the soulful funk, while both "Follow Your Heart," "Moving On" and "Giving Over" present stories of surrender and "giving over" to the Lord's will (instead of "giving up," a neat distinction). "Walk Through The Fire" (first heard on the Four Blood Moons Soundtrack) is a nice piece of AC pop, and adds to the list of genres and sounds represented on Giving Over.

The final track, "Crossroads," a song written in part by Ward's father a few years back during a trying time, is an honest dollop of Appalachian folk that uses a spooky, wheezing musical saw (or is that mysterious instrument a Theremin?) for a dirge-like feel. As a hopeful death song (a neat trick), "Crossroads" ends the album with an autumnal feel that's satisfying.

While Giving Over doesn't synthesize all of the Ward brother's influences seamlessly (it usually takes a few albums to take all those sounds and make something that is your own), the album has the raw ingredients of a great debut album, and the promise that Consumed By Fire has good things in store down the road a piece.