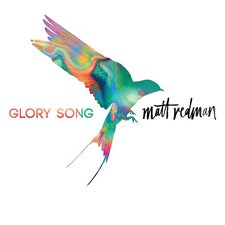 
Praise bands and worship artists multiply quicker than rabbits these days. Few strike a genuine and uplifting approach while the others wallow in mediocrity. When veterans of the industry like Matt Redman release new material, you expect them to show the younger artists a thing or two about crafting a good worship album. With Glory Song, Redman's latest, the man behind "The Heart of Worship" delivers a stirring and praiseworthy offering.

As an artist who has been leading worship for a while now, Redman's experienced hand guides Glory Song's 13 tracks in a diversely unified front that seeks to give glory to God even when life doesn't make sense. That might sound cliché, but the way it is pulled off is impressive. Musically, Redman's sound stays consistently in the worship pop/rock genre, but gospel elements weave in and out bolstered by a choir (used to great effect on "Greatest Hallelujah," "Hope is Marching On" and "Your Ways"), synth jumps to the forefront occasionally (with "Gospel Song" and "Still I Will Sing"), the lead guitar has its moments to shine, and there's even a little rap (thankfully only on "Gospel Song," more on that in a minute). Lyrically, Redman falls into some clichés, like asking God to "set me on fire," but he also shows creativity over other common pitfalls. Consider part of the chorus for "All Glory": "All glory to the Father/All glory to the Son/All glory to the Spirit, the Spirit of our God." Note he doesn't use the old "Three-in-One" rhyme with "Son."

Taken altogether, Glory Song meshes emotional praise with grounded theology, something missing in some corners of modern worship music. He writes call-outs to certain hymns and even uses an old refrain nicely on "One Day (When We All Get to Heaven)." The flow of the album is like a pleasantly curving road, turning from full-on worship to dealing with hard times and back again. With the variations of style in the music, the journey doesn't get old or feels like it's going on too long.

The few bumps in the road come from the fact that if you pull any one of these songs from their context, they tend to fade in with most of what's already in the worship ether. These tunes are at their most effective when taken with the full album. There are also several guest background vocalists jumping in for effect and work well mostly, though Guvna B's rap section in "Gospel Song" is distracting (admittedly, he's not given much to work with). Redman also extends a few of the songs with a long coda or "singing prayer." He generally pulls these off well, though some keep going long after the song should've ended, like on "One Day" and "Simple Pursuit-Glory Song."

After my first listen of this album, I dismissed it as an average praise collection. But with subsequent listens, I began to appreciate some of Matt Redman's depth and often felt like listening again immediately after the last note faded out. Glory Song doesn't break new ground or contain the next great praise classic, like "The Heart of Worship," but it is a refreshing album. If you feel burnt out with the plethora of praise bands and songs pumped out monthly, sit down with Matt Redman for a couple spins and let him take you on a genuine journey of faith that will renew your "glory song" to God.