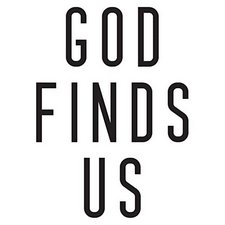 
Jason Upton is a quiet pioneer of what's now become a whole genre of worship music. Making music directly for worship services before such thing could have been considered as a "career move," he has unassumingly continued releasing independent worship albums as a life calling and not just to further a career. But lately, that descriptive tag should simply be shortened to just "artist."

God Finds Us, Upton's twentieth release, finds him mining a similar vein to his recent Table Full Of Strangers albums, with slow jazzy rhythms and great storytelling mixed with worshipful moments and bits of spoken word interludes that add interesting, dramatic highlights to the album.

After an earthy bit of instrumentation in the opening track (civil war violins, flutes, handpicked acoustic guitars), Upton offers a heartfelt monologue about how God often chased the characters in the Bible, and so, too, chases us time and again out of divine, pursuing love. This bit of narration leads into second track "Run Baby Run" (Jonah)" wonderfully. With a slow, jazzy tempo, Upton creates a mournful tone in telling the story of Jonah, the Biblical prophet "who didn't know who he was." It's a remarkable song that is masterfully crafted and haunting. The next few songs follow suit, and Upton's music here sounds as if he were an old-timey nightclub performer playing after hours to a small group of night owls who needed a dose of the gospel.

With the upbeat and countrified "Traveler," the spell of the sleepy nightclub is broken, like it's the next morning, and a brand new day is before the main character. The song ends with the traveler sitting down to a meal and saying hello to names as varied as "Corrie," "Eugene" and "Mother Teresa."

"Grow" finds Upton dialing up the electric guitar and proclaiming passionately "this garden's gonna grow." The song is a needed bit of rock and roll, and more numbers like this from Upton would be wonderful.

Ending with the heartfelt "Forgiveness," and a bookending monologue "Everything You Do," Upton's twentieth album shows him in command of his singular voice and place within Christian music. God Finds Us is an album to sit down and absorb as a singular work, and an excellent treatise on a loving Father who seeks out His lost children time after time.