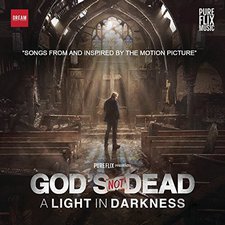 Various Artists
God's Not Dead: A Light In Darkness (Songs From and Inspired By the Motion Picture)


God's Not Dead: A Light in the Darkness (Songs From and Inspired By the Motion Picture) is a perfectly serviceable and inoffensive synth-pop collection, including ten new songs from different Dream Records artists that sounds uniformly similar to one another except for one standout: "Collide" by Landry Cantrell.

Almost every song here follows the basic of pattern of choruses that build into an unsatisfactory synth drop. It all would make lovely background music for fans of the genre, but there's not enough meat to merit this compilation's existence. Even lyrically speaking, too many of the songs are only tangentially about God still being alive.

These are precisely the reasons why Landry Cantrell's entry stands out so well. In comparison to Matthew Parker's syrupy "Till the End of Time" or Abigail Duhon's "Rebound," which sounds like a self-empowerment anthem by Rachel Platten or Katy Perry, Cantrell's "Collide" has serious lyrical heft and interesting, layered production. (Keep an ear out for the added piano lines, background vocals, and drum fills in the second verse.) Quite frankly, "Collide" is the only track that seems like it wasn't thrown together in a week. More than that, it could've been a highlight on his fantastic 2017 record, Projections. Musically, Cantrell has a pre-chorus that's as melodic and memorable as all the choruses of the other songs, yet where those artists would call it a chorus and go straight to the synth drop, Cantrell amps things up into a big, driving hook that honestly feels like the only real chorus here. Lyrically, Cantrell echoes John 1:5, singing about how Christ's resurrection overcame the darkness in a way that will eventually heal all of creation. It's perfect for the Easter weekend in which this album was released.

There are some disappointments here (Long Hollow WAVE's song doesn't compare to how awesome their 2017 album was) along with some surprises; Mass Anthem's "Nothing to Lose" is another highlight, as strong as anything from their 2018 album, meanwhile Joel Vaughn's album opener, "Alive in Us," gets more fun with each listen. We Are Leo deserve some credit for having one of the most cross-centered tracks here, and kudos go to New Hope Oahu, who managed to slip the movie's title into the lyrics of "Yours Forever."

For fans of modern Christian radio, this album functions as a new playlist for you, but outside of "Collide," I'd recommend, instead, that you spend your time checking out Projections by Landry Cantrell, Upside Down by Long Hollow WAVE, and Through People Like Me by Mass Anthem.