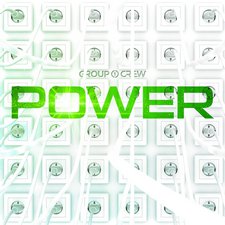 
Clocking in at a massive sixteen songs and an hour of music, Group 1 Crew's Power finds "the group" returning after a two-year gap (in which founding members departed and new ones joined up), with a message of encouragement and hope that plays like a summertime party mix for the redeemed and searching alike.

G1C mastermind Jose "Manwell" Reyes plays host to a bevy of guest stars that gives the album a house party vibe, and enables the album to maintain its momentum for its whole running length. New member Sarah Sandoz does a lion's share of the vocals, sitting alongside Reyes' smooth raps, but they only share a few songs together on account of the grand guest list. But the album's finest moment belongs to her. "Wake Me Up (Amnesia)" is a smooth-yet-epic prayer for wakefulness that takes the familiar metaphor for revival and gives it a fresh spin with clever word play and a fantastic melody.

If there was a runner up for best song here, it would be "Burn," a cautionary tale about a relationship that's running too close to the edge of "falling" into sin. With a series of separate-yet-thematically-linked tales and a hook beautifully sung by 1GN's Lauren Taylor, "Burn" is a song which bears a few repeats to capture the lyrics.

"Mona Lisa" a song about the art that God can make of our lives, lays into those who would artificially separate people into groups (gays, immigrants, agnostics, the righteous and unrighteous) and comes as close as any CCM song in recent memory in addressing the absurd tendency in the Church to marginalize people groups that are different than us. Reyes, who is of Spanish background, has a unique role to play in the CCM world in addressing an issue that needs addressing.

With a kitchen-sink approach to sounds, Power is a diverse and thoroughly modern album that mixes intense beats with interesting noises and synths to create a pallet of songs that range from club ready jams to slow-building anthems. "People Of A Second Chance" and "Set Sail" are slow groove numbers that give a range of emotion and breathing room to the beats around them, while the title track (with its funky and off-kilter guitar riff) and the closing "Best Is Yet To Come," would sound good on any dance floor around.

Power is a great return for G1C, and shows that good music can both engage the body, soul and mind all at the same time. With enough great songs to keep the playlist occupied for a whole summer, Reyes and crew have an album to be proud of, and one of the most melodic and meaty albums of the year.