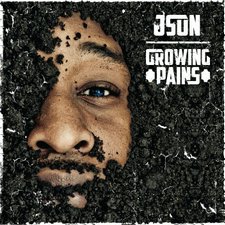 Straight of St. Louis, via Iowa City, rapper Json has recently released his newest album, Growing Pains. Json has proved himself throughout the last several years as a viable choice for fans of the Christian rap game. His newest effort does nothing if cement Json's place amongst the genre's best. He has presented a very real and personal album for his listeners that focuses on trials and hardships we face as believers, as well as personal examples from his own life, saying that they are all used for our spiritual growth.

Json flexes his ability in the "Intro" track of the album with great flow, solid beat, and a shredding guitar (which is also on other songs such as "Human," featuring Lecrae). Next up are two more solid tracks in the AD3-and-Tedashii-featured "Making Me Over," and the aforementioned "Human."

After a great start to the album, Json slows it down to talk to his listeners with the first of three "GP Interludes." In the first, Json discusses his marriage and describes it as the best, yet most difficult, relationship in his life. Json explains that his marriage has built character in his life. Json tells a story of how missing as flight worked out to be the best scenario for him to make a concert in the second interlude. He states, "God's sovereign will at work; it's a growing pain." The final of the three interludes talks about the difficulty for his family to move from St. Louis to Iowa City to further his ministry.

The weakest song comes along a few tracks later with "It's Alright," featuring Mikeschair; the song carries a heavy pop vibe. Collaborating with pop groups has become a trend in rap lately, but this one doesn't pay off as the Mikeschair influence is overbearing. The succeeding tracks "I the Beast" and "Brand New" more than make up for the shortcoming of "It's Alright." A couple of tracks later is another pop influenced song, "Behind the Clouds," this time featuring Chris Lee. Despite the cheesy sounding intro, this track really does pays off. The song has a really nice sound and Chris's vocals in the chorus are pleasing to the ears as he sings, "At the dawn of every new day lies the proof that night will fade. Just like a mother forgets her pain when she sees her baby's face, as she holds her. Smile at the joy my heart contains makes it all worth while. Even when rain is pouring down, You shine behind the clouds."

"Secrets (feat. J.R.)" is a deeply personal, and seemingly dark, track about sexual abuse. The beauty of the track is that, although it is dark subject matter, its main focus is not on the destruction, but the victory over the abuse through Christ. The album ends strong with an album favorite "We Not Folding," the Benjah featured "Credits Roll" and the final track "Goodbye," which presents Json's chops and flow better than any other track.

While there are a couple of songs worthy of the skip button and one noticeably weak track, the remaining good songs are really good. Unashamed, Godly lyrics based in scripture rule Growing Pains, and while it's not the most unique album musically, it's still solid. I'd place this one right up their with FLAME's recent album, The 6th. It's a worthy purchase for any rap or hip-hop fan.