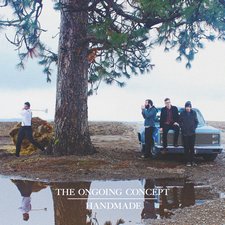 
Idaho may not have much going for it in the excitement department, except maybe for local metal outfit The Ongoing Concept, who are making a big name for themselves with their highly anticipated sophomore album, Handmade. Weeks before its release they dropped everyone's jaws by revealing that they had built all the instruments for their upcoming album from scratch. That's guitars and drums. They literally chopped down a tree, and fired up their power tools, even documenting the process as proof. Correct me if I'm wrong, but I believe that particular feat is unprecedented. Add to this the fact that they recorded and produced all of their music, filmed and edited all of their own music videos, and built much of their live set equipment. This band of brothers have created a whole new echelon of DIY all their own.

Their debut with Solid State Records, Saloon was heavily southern-themed sonically, but also experimented with several musical styles and instruments. This time around, the experimentation continues, but we hear a more solidified "standard" sound for much of the album--a standard which is built on upfront, chunky bass lines holding up the rhythm, and multiple guitar layers constantly dancing around each other, never quite matching, yet complementing to the rest of the accompaniment. We hear Dawson Scholz sing clean less often, instead belting out intense yells aside his brother Kyle. While Kyle handles all the heaviest screaming, the duo have such similar voices that at times it's difficult to discern between them. This can only be a good thing however, as one is always picking up right where the other left off.

While the crooning and yells of either brother have been applauded by most in past recordings, people seem to either love or hate Kyle's screams. On Saloon, the band claimed to have shut off all vocal pitch correction, opting for as organic a sound as possible. Whatever your previous thoughts, the screams have improved with time, becoming fuller, more stable, still a lot to take in, but terribly ferocious. What cannot be denied is how brutally organic the effect is, hearing the yells peak at the highest registers one second, followed by a guttural growl the next. The vocal range is terribly pleasing, as long as you keep an open mind.

What else is astonishing is the way that they blend genres so effortlessly. At the beginning of the album, you might think you've accidentally purchased a Michael Jackson remix album by mistake, until the new "standard" I mentioned clicks into place. The tracks "Feel" and "Falling" are both groovy, and the latter even adds bluesy guitar. In the midpoint of Handmade, we are treated to an interlude of sorts. A track called "Melody," which abandons down-tuned guitars and screaming vocals for ukulele and lilting vocal melodies, is completely at odds with the rest of the album, yet somehow perfectly keeps with their vibe. Finally, one of the gems on the album, "Soul," delivers a heavy helping of southern rock with one of the catchiest riffs you'll hear all year, sounding more like Maylene and the Sons of Disaster than Maylene's last album did. Before you know it, you'll be tapping your toes and chanting merrily with the line, "I sold my soul to the devil." This track is undoubtedly going to make some people uncomfortable. Bluntly shoving people outside of their comfort zones is The Ongoing Concept's M.O. Indeed, the central theme of their previous album Saloon revolved around pointing fingers at people and calling them out on stuff, whether it was for being fake, or shallow, or opportunistic, etc. If Saloon's theme was honesty/being real, then Handmade's is corruption, by and large.

The lyrics in "Soul" shouldn't alarm you, because it's a satire; but in between rounds of chanting that oh so volatile line, he says "Say it with me. I sold my soul to the devil." This is important; it's a reminder that the song isn't just a first-person account of some fictional scumbag. It's all of us. At some point or another, we have all claimed moral bankruptcy, sold out to the world, and essentially sold our souls to the devil. Earlier in the song, the devil speaks, "Hey there boy, you wanna be a star? You better have a plan. You better think of something, because you're not good enough on your own." This is a fact that the devil does not want us to forget. Fortunately, we can flip that on its head by accepting Jesus' sacrifice, which makes us "good enough."

Much of the album is satirical, which is par for the course. At numerous times, very negative and even dark lyrics are presented through upbeat music, making it seem twisted. In "Prisoner," the chorus bellows, "Give it up, give it up, for all you liars and thieves! We're all just prisoners." As well as in "Feel," when they lament a prevalent unknown entity "You make me feel like I am worth nothing, but you're my inspiration," despite it being a very poppy, funky track. This entity makes several appearances throughout the album. In one of the opening lines in the first song, "Amends," they sing, "There's a ghost and it's trying to take my head. Let it speak and I'll drown in deception." And again in "Unwanted": "Lead me on. You're all take without any give. Get out of my head." Who the owner of the voice is specifically is open to interpretation, but we've all heard that voice speak to us before.

If you pay special attention to the mix, at any given moment you can hear several layers of random guitar licks, ghostly vocal repetition, or subtle orchestral additions playing in the background. What's impressive is the sheer amount of detail that goes into every track, but if there is any subject of contestation, some may find the music too busy. However, there is certainly no shortage of talent or creativity on Handmade. With their iconic mixture of musical styles, intensely raw vocals and thought-provoking lyrics, The Ongoing Concept are rightfully carving out their own corner of the metal scene.

If there's one metal band that just doesn't care about your opinion on what metal should sound like, it's The Ongoing Concept. The band is continuing to defy expectations on Solid State album number two, Handmade, which unashamedly skirts the line between a number of genres. Face-pounding metal is one of those, of course, as you hear in tracks like "Trophy" and "Unwanted," but there's more to it than that. The first song, "Amends," is wonderfully loud and raucous, but it also features some horns and maybe even some Fall Out Boy-esque vocals, while the following track, "Feel," features a dance rock energy that reminds me of earlier Jonezetta and Family Force 5. Then there's the folk pop "Melody," which brings Trampled By Turtles to mind, and the closing track "Falling," which bears some resemblance to The Rocket Summer. Handmade is all over the place, musically, and it works incredibly well for The Ongoing Concept. The only hesitance I had was in the tongue-in-cheek "Soul," as the Showbread-like chorus screams "I sold my soul to the devil" a number of times, but in context of the song, it actually makes sense and isn't literal - that being said, be mindful of those who don't get satire when listening to that one. Regardless, The Ongoing Concept has an excellent metal album on their hands, and one that is a sure contender for the best of the genre that 2015 will have to offer. - Review date: 6/8/15, Scott Fryberger

There really is nobody like The Ongoing Concept in the Christian heavy music scene right now. Where other bands seem to almost be intentionally trying to conform to the most basic metalcore clichés, these guys are going out of their way to be unusual. Who puts a horn section in a metal album? Well, apparently The Ongoing Concept does. Who would be daring enough to record an entire album on instruments handmade by the band itself? These guys. But they aren't just bizarre, they make genuinely good music. It's over the top, full of swagger, and rambunctiously fun. Perhaps most importantly, it's creative and varied and never gets bogged down in familiarity. Sure, by the time the album is done you might feel like you need a break from the craziness, but perhaps that's part of the appeal. - 6/21/15, Timothy Estabrooks of Jesusfreakhideout.com

The Ongoing Concept came out of left field with Saloon in 2013. The western themed album, complete with saloon-inspired piano, turned heads and made a lot of people pay attention. These metal innovators are back with their follow-up, Handmade. This time around, the western flair is gone and several other music styles enter the picture. Pop ("Amends"), funk ("Feel"), folk ("Melody") and blues ("Soul") all make their way into the metal mayhem. Handmade is a brilliant listening experience, and while it isn't as cohesive as Saloon as a whole, the differing genres blend together seamlessly. The talent in this band is evident, and tracks like "Feel," "Prisoner" and "Unwanted" are sure to please. Don't miss out on one of the most creative bands, and albums, in the business. The Ongoing Concept are shining examples of what creativity and experimentation should look like in the music world. Bravo! - 6/15/15, Michael Weaver of Jesusfreakhideout.com