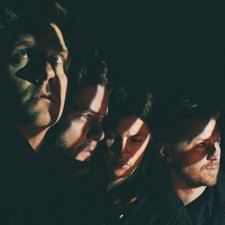 
Every Needtobreathe release brings with it certain high expectations due to their track record of producing excellent albums. This is why many fans were perplexed by their musical direction with H A R D L O V E in 2016. With this album of B-sides, titled Hard Cuts, it was uncertain as to what iteration of Needtobreathe fans would get. Would there be more synths and the pop production of H A R D L O V E? Or would we get a return to the southern rock/alternative of prior offerings? What we get here is some of both, and although an overall solid set of songs, Hard Cuts is clearly a B-sides album.

First off, we get another version of title track "Hard Love," this time featuring guest vocalist Serena Ryder that this reviewer didn't feel was necessary. Though not a bad song per se, simply slowing down the track and adding a different female vocal didn't feel interesting enough to warrant repeat listens. Also, we get another version of "Hard Love" as the final track, featuring yet another female vocal from Andra Day that just feels redundant. A highlight of the new cuts is "Waiting," an organ led song of yearning to a woman with lines like, "You keep me waiting/Shaking/Trembling/Chasing/Mistakes that I made/Which words did I say/Oh I can't take it I need you/Right now cause you keep me waiting." Also a great addition to the Needtobreathe catalogue is song "Count on Me," which feels very much like a cousin so their song "Brother" in message, though paced slower musically. This one would have fit nicely within the track listing of H A R D L O V E, and could have replaced one of the weaker tracks that did get included. The best of the new crop of songs though is "Cages." It's a simple piano song with lyrics that speak to anything looked to outside of Christ as just another "cage" of imprisonment. The chorus says, "I went looking for attention/in all the wrong places/I was seeking recognition/All I got was these cages." Overall, there is more to like than dislike and there are some solid additions to the Needtobreathe canon of songs. If you're looking for the cream of the crop, you'd do best to focus on "Waiting," "Count on Me," and "Cages." - Review date: 8/10/17, written by Josh Balogh of Jesusfreakhideout.com