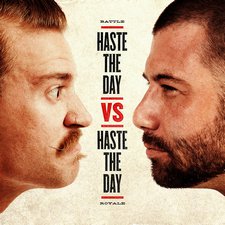 Haste the Day announced their retirement as a band earlier this year shortly following the release of 2010's Attack of the Wolf King, so one might expect a "best of" or "hits" release to follow. Well, here we are: Battle Royale: Haste The Day Versus Haste The Day. It's a compilation of their entire musical career in live form; an album that HTD had not released yet up to this point. Oh and by the way, this most creative album includes all HTD members (past and present) which means that you'll hear Stephen Keech and Jimmy Ryan sharing the mic.

HTD's live appearance opens with a handful of lines from the blockbuster film Independence Day. The words get you pumped and you're soon ready to go. Then the door gets blasted off as HTD begins the night with "68." The sound is pure metal and we're set for a night of moshing and circle pits. As the concert progresses, the band does justice to both Jimmy and Stephen by playing a great mixture of old and new tracks, hitting a song from each album all the way back to 2004. "Pressure the Hinges," "Blue 42," and "Fallen" are up next and one can easily recall the great albums of Haste The Day. "The Minor Prophets" and "Mad Man" follow and keep the guitars nasty fast while the double bass keeps kicking.

To slow it down for just a bit, the boys play a beautiful rendition of "Autumn." It's a simple yet wonderful offering to those in need of a break from the hardcore onslaught. That break ends when "Walk On" and "White Collar" are played, bringing the show back to being loud and wild. You can just imagine the pit opening up and swallowing those brave enough to enter. "American Love" comes out epic and can easily be labeled as the crowd's favorite song, while "Substance" takes the idea of heavy to a level that most HTD fans may not even recall. Wrapping up the night is "When Everything Falls," a perfect ending to an excellent live record.

My only negative issue with this release is that the very popular "Stitches" was omitted for some reason, which leaves me feeling like there should have been an encore track. Obviously with live shows, the sound isn't extremely clear, as is the case here too, but the production does fairly well and it's easy to imagine yourself right there witnessing Jimmy and Stephen share the stage. As they say, "all good things must come to an end" and this is an ultra-imaginative and very cool finale for the fans of HTD.

Well done Haste the Day, you will be missed.

- Review date: 8/26/11, written by Kevin Hoskins of Jesusfreakhideout.com class="coversize" align=right> Early Thoughts...
I'm sad to say that long time fan favorite hardcore metal band Haste The Day is hanging it up. But, as they close out this chapter of great double bass, heavy guitar strings, and a wonderful blend of vocals, they are offering a special live album to their fans, titled Haste The Day Vs. Haste The Day. And when I say special, I mean that this album not only takes you through the entire Haste The Day career, but it does so with Stephen Keach and Jimmy Ryan sharing a stage together. Long time fans will love hearing "American Love" and "Blue 42," while newer fans will enjoy "White Collar" and "68." This is a great addition to any metal collection, a must for all HTD fans, and a most excellent way to end an awesome musical journey... - PReview date: 8/29/11, written by Kevin Hoskins of Jesusfreakhideout.com --->