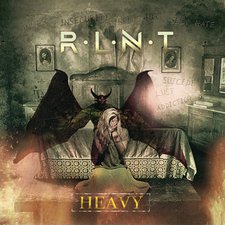 
It isn't everyday that you see a fresh nu-metal band in the Christian industry, but Relent has been bringing the heat since their debut in 2019, titled Heart Attack. After signing to Rockfest Records in 2020, they re-released the album, and then set their sights on 2021. The group is now here with their sophomore record, Heavy, which certainly lives up to its name - from both a musical and lyrical standpoint.

Right off the bat, "Think You Got It" tackles the subject of hypocrisy in the church, speaking to leaders who manipulate and use churchgoers for their own gain. "LOW" focuses on the tough reality surrounding self-harm and suicide, as lead singer Miggy Sanchez sings, "I wanna believe, but I have this disease inside / It brings me to my knees / It doesn't show / But I wanted you to know / Sometimes I feel low." One of the project's strongest tracks is found in "Last Days," which sheds light on the seemingly neverending darkness facing the world today; "Falling further into darkness / Waking up the vacant souls / Now we're staring at the face of the last days."

The title track tells the gut-wrenching story of what it feels like to be trapped inside sex-trafficking, something Sanchez' own wife experienced; "Look what you did to my soul / Look at the size of the hole / Look at the purpose you played / In making me pray through the pain." As we head into the second half of the record, "Memories" is another hard-hitting number, one that is personal for the band, as they unexpectedly lost a close friend during the production of Heavy. However, despite all of the hardships covered on this album, Relent brings some positivity towards the end, as the victorious "Critical" and "Enemy" close it out with a bang.

Something to note is the band's use of language on occasion, similar to an artist like Andy Mineo. One "d*mn", and multiple usages of "hell/hella" (i.e. "Heavy" and "Snakes"), may detract from the listener's experience, depending on their view on the issue.

That being said, this release is incredibly solid from start to finish. While they draw comparisons to P.O.D., there is quite a bit of variety found throughout every song, and unexpected shades of hip-hop make appearances at times to shake things up. The musicianship is as tight as can be, and Sanchez does an excellent job of mixing up vocal techniques to fit each track just right. Heavy is a fantastic sophomore endeavor, and is definitely worth picking up for fans of the genre. There is no doubt about it: the road ahead for Relent is bright.