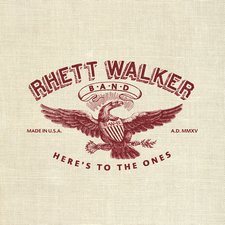 Rhett Walker Band
Here's To The Ones

Rhett Walker and his band mates made an impressive debut two years ago with Come To The River, and Here's To The Ones continues their high-test, southern rock stampede. Walker possesses an impressive set of pipes, and his soulful bellow fills up a rock song like few other voices in Christian Music.

"Clone" opens up the action with a spoken word intro over a stomping bit of southern rock music (complete with a rhythmic chain and stomp box accompaniment), and a bit of pointed-yet-rambling monologue about hypocritical believers before raucous guitars enter the scene. "Clone" is a clever thematic update to Steve Taylor's 1984 classic "I Want To Be A Clone," and proves that some subjects will never really be outdated. It's also a gutsy song to start an album off with in today's CCM climate, and Walker and his band show their mettle in making such a bold statement right off the bat.

"Here's To The Ones" flips the script a bit and, in John Mellencamp style, celebrates the blue collar, small town folks that Walker grew up with, and still holds dear. This tune is reminiscent of songs that Big Tent Revival used to write 20 years ago, and though it's a popular subject in country music, it doesn't get much airtime in Christian music. "Adam's Son" is another driving, throbbing southern rocker in the vein of Three Doors Down, and "Dead Man" bears a spooky intro that does the song title justice. "Amazed" soars as a song of remembrance about God's amazing grace and not running so fast that we forget to truly live.

In "Someone Else's Song" and "Broken Man," Walker shows a bit of maturity in taking a hard look at his own life and marriage and seeing how his humanness and fallen nature cause heartache, but in the end he thanks God that He still uses him, a broken man. This humility is hard won and shows the scars of time, and in "Lift Me Up"--the first bonus track of the Deluxe Edition--Walker says a prayer to end the album that the Lord would "lift me up from this muddy water" over a nice mandolin accompaniment. "Welcome Home" bookends this theme with a celebratory song about Heaven.

Here's To The Ones is a rare treat in that both the music and the message sound equally authentic, and shows that Walker, in all his grittiness and imperfections, still has his focus in the right place.

More than one critic has touted Rhett Walker and his band mates as the eventual heir apparent to Mac Powell and the men of Third Day. Raucous Southern rock songs like "Make Me New" from the band's 2012 debut, Come to the River, lent significant fuel to that fire, as do similarly bracing second-album cuts such as "Clone" and the equally impressive "Dead Man," the latter of which sounds as if it might well be a lost track from any of Lynyrd Skynyrd's first three records. While the RWB debut was largely split between the hook-filled Southern rock and the subdued modern worship textures featured on the Top 20 radio single, "When Mercy Found Me," the follow-on effort finds the group pushing the country quotient further to the forefront and augmenting it with tinges of Americana ("Adam's Son"), classic gospel ("The Other Side") and pop-leaning blues (the superb bonus cut, "Lift Me Up"), all of which are worthy additions to the Walker canon. But while the heightened eclecticism is admirable in theory, it occasionally plays out less convincingly in actual practice. "Love Like Jesus" is a generally undistinguished attempt at country-tinged modern worship. The remake of BTO's 1974 hit, "Takin' Care of Business," loses far too much of the spit and vinegar that rendered the original version so engaging. And the by-the-numbers heart-tugging country/pop of "Here's to the Ones" ("Here's to the red, white and blue/ Here's to people like me and you") sounds, for lack of a better comparison, like the sort of thing one might expect to hear on a pickup truck commercial. As with the debut, the band's lyrics continue to be a bit awkward, inscrutable or clichéd at times. That said, Walker & Co. still manage to pull off more than one thought-provoking insight into the human condition, as songs like "Dead Man" so ably prove. In terms of uniformity, the inaugural release gets the slight nod over the latest project. But, at a generous 15 tracks, the Here's to the Ones Deluxe Edition, patchy as it is, can easily be whittled down to a far more cohesive album that very nearly equals its hugely popular predecessor. - Review date: 10/24/14, Bert Gangl