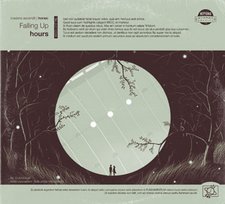 Ever since Falling Up fell apart (pun intended) early in 2010 and then returned in 2011, they have done things a little differently. They were one of the first major groups connected to CCM to launch a Kickstarter campaign (for Your Sparkling Death Cometh), but, after the campaign and album's success, they changed tactics. Last year, the band surprised fans with news they were releasing two albums and an audiobook over the course of several months. Hours, an experimental rock album, accompanied the audiobook.

While the story of Hours follows a class of orphans as they explore a mysterious gym, the companion album is a non-instrumental soundtrack. The beginning of the album won't catch fans by surprise since it has much in common with Your Sparkling Death Cometh. The first three songs feature a familiar mixture of moody, dreamy, and techno-laced sounds combined with unnecessarily elongated endings. It almost feels like a less enthusiastic repeat of their last effort until "Aeva and the Waving World" appears. The booming song is layered with synth and establishes an unforgettable, ominous atmosphere.

From there, the project picks up traction and never really slows down as Falling Up starts a string of diverse indie rock songs. With its progressing tune and marvelous instrumental finish, "On Growing Things" is terrific, and "Transmission" is a solid alternative rock song with a multi-faceted refrain. Although "Intro The Radio Room" isn't the most complex song, the sheer emotional output in the chorus is stunning, and it proves to be the most appropriate connection with the audiobook. From a track list standpoint, Falling Up has always been upfront about their heavier material before dropping back to their quieter finishers. However, "Prillicians" is fast-paced and guitar-driven from the beginning, and the song revives memories from the days of Dawn Escapes. The finale, "In Echoes Forever," is even more aggressive with an implacable chorus that pushes Jessy Ribordy's vocals to the limit in its final seconds.

Much like Fangs and Falling Up in general, the lyrics on Hours are ambiguous, but there are connections to the main story if you listen long enough. A line here or there strings back to an event or place in the plot, but it still doesn't tell much of a coherent tale. One would have more luck plotting out Fangs on the album alone than one trying to write Hours' storyline with its musical partner. Although there isn't a mention of God, "Finn Hatches A Plan" references the main character's desire to protect a fellow classmate.

Lyrics included, Your Sparkling Death Cometh is probably still Falling Up's strongest work, but Hours features the band's finest, most innovative work to date. Taken without the audiobook, there isn't much of a message to hang a hat on, but the science fiction/supernatural inspired lyrics might inspire daydreaming. On music muscle alone, the album succeeds and proves to be an outstanding addition to Falling Up's experimental rock library.