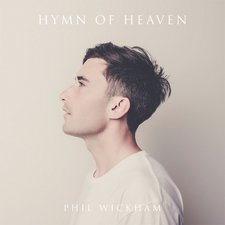 
It is hard to believe that Phil Wickham has been around long enough to release nine albums, let alone within fifteen years. Returning with his newest set of tunes, titled Hymn of Heaven, in 2021, listeners are treated to more of the soaring vocals and vertical songs of praise for congregations the world over to sing on Sundays. Speaking of his newest offering Phil says, "Hymn of Heaven is full of praise and thankfulness, just lifting up the name of Jesus and speaking what we really know the reality is even though we don't see it." Wickham continues, "All I want to do is facilitate moments where people can encounter the presence of God." This he certainly does to varying degrees across the thirteen tracks on Hymn of Heaven.

Whether he hits the mark of this goal fully or not may depend on your current relationship with the amount of worship-centric music pouring out of every church, and many an artist once known for more varied musical styles. Unfortunately, the narrow "sound" that the industry remains stuck on is largely cookie-cutter, lacking in flavor, and nuance. With an already narrow subject matter in Christian music focusing on the same "Christianese" words, phrases, and metaphors, it is often hard to differentiate one song from another. Thankfully, Wickham side-steps this for the most part due to his passionate tenor, veteran savvy, and a "who's who" of co-writers along for the ride.

The first five songs roar out of the gate as the strongest of the set, with single "Battle Belongs" released last year in advance becoming his highest-charting single to date, peaking at number two on the US Hot Christian Songs chart. It's a huge-sounding song of passionate defiance and a great album standout. The title track, "Hymn of Heaven," is anthemic, with a big assist from a chorus of backing voices pushing the song ever higher. The joyous "House of the Lord" is the album's attempt to match "This Is Amazing Grace," "Living Hope" or "Your Love Awakens Me" from previous albums, though it falls just short. A piano ballad with an absolutely soaring vocal, "It's Always Been You" might just be the album's biggest vocal highlight as Wickham and a tight string section carry the song upward to the heavens. Finally, "Where I'm Standing Now" gets a big assist and co-write from the in-demand songwriter Brandon Lake. His grittier, more Americana/alt-rock-leaning voice is a nice complement to Wickham's tenor on a tune I could easily see on the next Elevation Worship or Bethel Music release.

Regrettably, beyond these five opening songs, with the addition of "1,000 Names" and "God of Revival," the middle portion of the album suffers from a "been-there-done-that" feel. It may not be a popular opinion, but I happen to think that the worship-leaning artists making songs to be sung primarily by a congregation should stick to the EP or single format to avoid what amounts to album filler. "Reason I Sing" and "His Name is Jesus" are the best examples of this, containing a disappointing amount of clichés, with the latter being overstuffed with six co-writers, while "Look to Jesus" is a bland re-tread. As an album, Hymn of Heaven falls short of high marks, although several top-notch songs carry it further than most others in the genre.

So, while the album as a whole is a classic mixed bag, the songs that nail it really do. Wickham is one of the better voices in the genre, and he continues to write hopeful and encouraging songs for the believer to belt at church and at home. Next time out, it would be nice to see some experimentation or a greater depth of lyric, perhaps better balancing the devotional songs with the congregational ones. All in all, Hymn of Heaven has much to enjoy and is worthy of a listen, with "Battle Belongs," "Hymn of Heaven," "It's Always Been You," "1,000 Names," and "God of Revival" making up the best of the bunch.