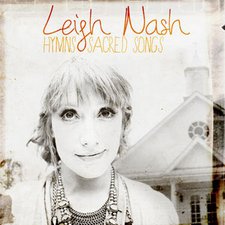 Many a person has wondered what the music of Heaven will resemble. Filled with beautiful voices and awe-inspiring orchestrations, it's sure to be beyond what we can ever fathom or imagine. However, on this side of Heaven fans of Leigh Nash will no doubt agree that her unmistakable vocals have danced the celestial line of angelic. With that Heaven-focused mindset, Leigh Nash is offering a worship album of Hymns and Sacred Songs, featuring her own expression of admiration to the One who saved us.

Beginning the album is the old hymn "Savior, Like a Shepherd (Blessed Jesus)." While the melody has changed very much from the original, it is an incredible improvement. Approaching the song with a leaning toward bluegrass and folk, the song takes on new depth and is a fresh and honorable interpretation of the classic. Leigh repeats this folk style with two other hymns, "Oh Heart Bereaved and Lonely" and the closer "Be Still My Soul." It creates an almost organic feeling, as the renditions sound more raw and simple which brings the hymns to life.

Some more liberal interpretations come with three of the better-known hymns; "Come Thou Fount of Every Blessing," "Blessed Redeemer," and "Praise the Lord Who Reigns Above." They feature very different melodies and more pop music sounds, such as delayed guitar, electric piano, and very creative percussion. To say the least, these are not only standout tracks on the album, but they are some of the greatest versions of the hymns to date. The simple melodies and well-known lyrics could make singing these songs at a Sunday church service even more appealing and enjoyable for local worship teams.

Furthermore, Leigh covers a number of recent tunes as well. "Power of the Cross" and "Song of Moses" remain close to the originals but have that extra kick generated by Leigh's vocals. However, they don't compare to "Come Ye Thankful People Come," which she helped write the music to. The song resembles the sounds of previous Sixpence releases as it has excellent harmonies and the tenderness of the acoustic guitar. Combining those with the excellent lyrics written in a hymnal style, it's a flawless song.

While the album is near faultless, it does have its minor setbacks as it is rather low-key and doesn't have much going on dynamically. Nevertheless, that's what listeners have come to expect from Leigh Nash; easy listening, uplifting, yet melancholy music. If you're a worship leader looking for a way to introduce hymns or at least new interpretations of hymns to your church, this is one of the albums that can help. Plus, if you want music that is simply good to listen to, this album will take you where you want to go, and it's quite the heavenly place.

As frustrating as it is, it seems 2011 will go by without a new project from Sixpence None the Richer. Promised for what's been a couple years now, Strange Conversation has been delayed time and time again, but little did their fans know that Leigh Nash had been cooking up a solo project in the meantime  an album comprised solely of both traditional and modern hymns, simply titled Hymns and Sacred Songs. Even though many of these sorts of projects can be disposable or lacking in long lasting flavor, Nash mostly avoids both of these potential pitfalls to create a tranquil venture that only expounds upon the gravity of the hymns' language. Even though Nash's signature sound has never been particularly upbeat, opting for a more somber musical approach, it fits the lyrics like a glove ("Power of the Cross" is particularly powerful). Some of the more familiar tracks have also had altered melodies to keep things interesting, and instead of coming off as gimmicky, it works well ("Come Thou Fount of Every Blessing," "Blessed Redeemer"). For both Sixpence and worship fans, listeners can't go wrong with this magnificently-executed record; Nash's album hits all the right notes, if only lacking a real variety of both energy and serenity. While fans continue to await the release of Strange Conversation, the stunning composition of Hymns and Sacred Songs, at the very least, serves as a wonderful prelude that is bound to bless every one of its listeners. - Review date: 11/14/11, written by Roger Gelwicks of Jesusfreakhideout.com