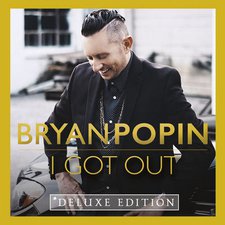 Bryan Popin
I Got Out (Deluxe Edition)


"Step in the Name," the opening track of Bryan Popin's latest release, I Got Out, encapsulates what makes this album both thrillingly wonderful and mildly frustrating. As is standard for gospel artists, Popin wears multiple hats: composer, musician, bandleader, and sometimes lead singer. His crowd-hyping kicks off the record, stating, "Gospel music at its finest: old school, new school, here we go!" My first time through, I didn't expect Popin to pull off this very high bar he sets for himself. Could this album really be gospel music, of all stripes, at its finest? I'm pleased to say the answer is, "Yes!"

While Popin is not a particularly strong singer, as displayed on "Step in the Name," his weaknesses allow him to rely on autotune, vocoders, and talk-boxes in a way that's really fun. Meanwhile, he surrounds himself with A-list singers and musicians (especially drummers and bassists) who are only getting started on "Step." The musicianship on this album is off the charts, including Popin, who's a world class keyboardist. Their stupendous, jaw-dropping playing, mixed with these dynamic and surprising compositions, creates an album experience that's an utter joyride, even when the simple lyrics leave much to be desired. For example, "Step in the Name" urges listeners to "step into your miracle," and at one point, he literally leads you in "stepping" dance instructions a la "Cupid Shuffle." Thankfully, such goofy indulgences don't derail the songs; on "Step," the dance instructions are followed by an instrumental section with Dirty Loops-level virtuosity, which then breaks down into beat-boxing before slowly building layers back up like an old school Daft Punk track. I'll say it again; it's thrilling.

While many of these songs are deceptively simple, there is one that seems notably underwritten: oddly, lead single and title track, "I Got Out." The song is one chorus sung over and over, with nothing substantial in between. The concept, of God pulling people out of their trials, is admirable enough, yet we are never given any idea of what these trials could possibly be, or what they were personally for Popin, a man who apparently has quite the testimony. What did he get out of, exactly? At one point, Popin says, "For those of you who are still going through some stuff." Stuff. The lack of details in this or any other song lends to a sense of lyrical insincerity.

Insincerity isn't the only potential problem; many lyrics seem to lean toward the Prosperity Gospel and the Word of Faith movements. While you should refer to Scripture before listening to a music critic (and I'd personally suggest John 14-17), I'd like to point out a specific example. There's a lot of language on I Got Out about speaking new realities in your life, which carries the assumption that you can reckon God's promises at will. On "Over Me" - which is otherwise a fun, Caribbean-style track reminiscent of Newworldson - Popin and the choir declare, "Let's speak faith over our lives right now / No more sickness, no more sadness, no weakness over me / Only goodness, only gladness, over greatness over me." I cannot say that I know what your future holds; but I do know that Christ guarantees persecution if we follow and obey him. Of course, every promise is "yes" and "amen" in Christ, but that also means that most promises - such as the removal of sin, trials, and suffering - will not find their culmination until we are standing face to face with Christ in glory.

Considering both the musical and lyrical issues, if I'd heard "I Got Out" on the radio, I wouldn't have wanted to hear more - which is sad, seeing how this album has so much more to offer. The prime example of "more" is the song "We Overcome," which may be the best song I've ever heard from the gospel genre. In spite of a six minute running time, I cannot get enough of it. (Imagine Kirk Franklin penning a song for Powerline from A Goofy Movie.) Another highlight is the fittingly-titled "Beautiful Savior" featuring Tasha Page-Lockhart, who showcases just how transcendent Popin's compositions can be. I Got Out is an exercise in carefully crafted bombast, and "Beautiful Savior" displays how a large cast of musicians and vocalists can go crazy without overwhelming the listener or losing the song. Whether you hear the ten-track standard release or the seventeen-track deluxe edition, fans of new school gospel, old school gospel, or anything in between should find plenty of encouraging thrills in I Got Out to bring you back again and again.