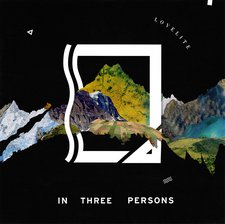 A pair of worship leaders from Southern California (also a husband and wife duo), Andrew and Jen Polfer are the leaders and founders of pop rock/worship quintet Lovelite. The group has released a couple of solid albums through Come&Live! in the past few years (as well as a small handful of remixed tracks) and are now focusing on their third full-length record, a concept album called In Three Persons. The album is being released in three parts, each exploring a different person of the Trinity, and then is being released as a full-length album.

If you picked up each of the three separate EPs, you may notice that the tracklist is different on the full-length. Instead of starting with the songs about the Holy Spirit and ending with the songs about the Father, Lovelite re-produced the tracks to make them flow in a different manner, and mixed the tracks all around. Whether this is part of the concept of the three parts being one whole, or they just wanted to change it up a little is unclear, but the tracklist on In Three Persons is an excellent one.

Lovelite's two previous full-length albums, All Color and Nearness, were both good musical offerings, but in different ways than In Three Persons. All Color and Nearness were pop rock that could probably be compared to the likes of Danyew or Seabird. A good sound, yes, but In Three Persons takes things up a notch or two. The sound is more akin to something like All Sons & Daughters or Gungor (not that that makes it better, but as far as personal preferences go, I dig the latter sound more). This album is melodic and worshipful and a little experimental, with a good portion of upbeat, rockier sections as well.

"Brother Sister" starts us off with some electronic drums, with some beautiful harmonies from Jen Polfer before Andrew's smooth, relaxing voice comes in. It's an electronic-based track, with hints of Muse and new wave (interesting combination, I know). It's an endearing track that starts thing off excellently. "Heart Starts Beating," however, brings some electric guitar into the mix. There's still some 80s influence, but it also has a bit of a modern worship sound to it (with maybe the tiniest bit of a Hillsong imprint). There's a lot of up and down from start to end, as far as tempo, but the changes always come at the right time. Some Arcade Fire influence comes in the moody "Every Breath Is A Chance," which is composed of mostly just an electronic high hat and very vague synths (and something that sounds like moog that sneaks its way in) for about half of the song, then picks up with some gang vocals (term used loosely; remember, it is a worship album!) and a full orchestration of keys and drums. More Arcade Fire influence comes in the mid-tempo "Collided," while "Strength of the Father's Love" feels more like something you'd hear from All Sons & Daughters, with its acoustic structure and Jen's vocals dominating the song.

Lovelite's newest album is, by far, their best to date. With fantastic 80s-tinged indie pop and worshipful, passionate and honest lyrics from the Polfers, it's certainly an album any fan of worship music and indie pop should have in their collection. It's not without its flaws, but they're not often. The biggest complaint I could find about it was that some of the lyrics seemed a little unimaginative, such as the half-sentence laden chorus of "Collided," where they sing "You collided justice and mercy, opened my eyes to Your glory, undivided heart for You only, nothing less than my devotion." But this is just one example of only a small handful, as the majority of the album features quality songwriting. You can check out a sample of the album for free at Come&Live!'s website, or you can pick up the full album at all the usual online retailers. I would suggest the latter. class="coversize" align=right> Early Thoughts...
Lovelite is making a return to our indie pop-loving ears this year with a new full-length album called In Three Persons. The album touches on the qualities and characteristics of our triune God (Father, Son and Holy Spirit). The band showed some great potential in their first two albums, All Color and Nearness, and with In Three Persons, they've really surpassed expectations. The album is very organic, yet pretty experimental. Andrew and Jen Polfer take turns providing the vocals, creating a Gungor-like vocal atmosphere, with beautiful music that ranges from somber indie to pop rock to electronic music (heck, "King of Love" even has 80s pop elements). There's something here for almost everyone to enjoy, as it provides a very worshipful album with high quality and well-thought-out music. With this album coming out in three parts (each focused on a different member of the Trinity), you can already buy parts of the full album and get a good taste, or you can pick it up from their Big Cartel store when it comes out and get the full experience. Either way, I highly recommend that Lovelite fans check out the whole thing, as well as fans of bands like Gungor and Jars of Clay... --->