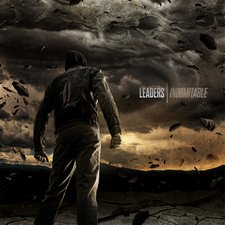 Facedown Records is really doing a great job of putting itself back on the map and holding its weight in the over-saturated metal/hardcore scene. After putting out absolutely stellar releases from The Burial, Hope For The Dying, Colossus and not least of all the legendary Extol this year, people are beginning to pay attention to Facedown Records once more, and rightly so. The next big release to come from the Facedown camp is courtesy of Leaders, a Hollister, CA based quartet churning out some of the most vicious metalcore you've ever heard. After a complete line-up overhaul, with the only original member being vocalist Lazarus Rios, Leaders has finally released their long-awaited sophomore album, entitled Indomitable, and although it fails to impress in the same way as their labelmates have this year, it is certainly a force to be reckoned with in its own right.

Indomitable opens up with "Hell," an excellent taste of what to expect from the album. Harsh growls, chugging guitars, blast beats and crunchy breakdowns characterize Leaders' brand of metalcore, which is less about dexterity and musical prowess, and more about channeling their passion through crushing riffs and mosh pit inducing anthems. Leaders does a great job a channeling the strong arm grooves of Living Sacrifice if they were fused with the hardcore sensibilities of Strongarm (no pun intended). As expected of a hardcore album, all of the songs are quite dark sounding and void of any melody, but the dominant message throughout the album is one of perseverance and relying on God's strength to overcome obstacles in this life, as evidenced by the album's moniker.

Every aspect of Indomitable is a step up when compared to Leaders' debut album, Now We Are Free: production, songwriting, each of the members' performances, and the overall heaviness. They even recruited Impending Doom's Brook Reeves for a guest vocal spot on "Weak Minds." Overall, it's just a stronger album than its predecessor. Admittedly, nothing Leaders is doing is particularly groundbreaking, and at surface level, they're not doing anything much different or better than any of their contemporaries. However, sometimes it's good to have an album to just let loose with and feel indomitable while blasting it in your headphones, and Leader's sophomore effort is one of those albums.