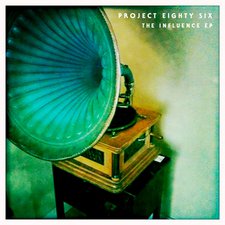 
When Project 86 kicked off their Pledge Music campaign for their 20th anniversary and newest album they promised a full-length album and an EP. Pledgers would be given the new full-length album (10 new P86 songs) and an EP of 5 cover songs. This would become the Influence EP. Since reaching 100% funding, however, Project 86 has promised a double album with 10 songs if they reach 150% of their funding goal. This means those pledging to the campaign now would receive the Influence EP immediately, the full-length Project 86 album (with a glimpse at one new song per month), plus an additional 5 influence songs -- making it 20 songs for 20 years. For the time being, we will discuss the material that has already been released in the form of the Influence EP.

Every song on this EP is a bit dangerous to cover for different reasons. The first song released was a pretty powerful cover of the Beastie Boys' "Sabotage." The song is a favorite for Beastie Boys fans and loved by those who aren't really fans of the Beastie's at all. The original is an epic song with a great music video, and its most recent usage in Star Trek Beyond was quite awesome. P86 brings a super heavy feel to the song and pull it off nicely (And vocalist Andrew Schwab chose not to include the use of the "F" word that's in the original). "Fell on Black Days" may be the most dangerous song to attempt. It's a really great rock song and one of Soundgarden's best. Project brings an electronic vibe similar to the sounds of Rival Factions. To be honest, on the first play the song didn't click. After multiple listens, though, it's one of my favorites on the EP. It's a bit softer than the grunge rocking original, but the arrangement works. The safety song is easily Fugazi's "Facet Squared." Project gives a solid punk rock effort with a great breakdown section at the end of the track. "Man of Constant Sorrow" from the O, Brother, Where Art Thou? soundtrack is a super cool addition. The arrangement here is also more electronic in nature and completely abandons the bluegrass sound from the original. The band, however, keeps the background vocals in the verses and personalizes the song a touch. Instead of singing, "I bid farewell to old Kentucky, the place where I was born and raised," from the original, Schwab replaces "old Kentucky" with "Orange County." It's a completely different sound, but it turned out really well. The final song they tackled was another doozy. Billie Holiday's "Strange Fruit" is a classic song from way back in 1939. Project 86 plays this one closer to the vest with a music arrangement that sounds much more similar to the original. Schwab sings the lyrics a little more straightforward to the rhythm than Holiday did, but the simple piano keeps the song sounding as it should. The recording doesn't feature a trumpet, but instead a lightly overdriven guitar solo in place. Many may have thought that Andrew Schwab's angry vocals couldn't pull off such a delicate song like this one, but he does so very nicely and surprisingly.

The Influence EP is a nice collection of songs that gives some insight into where Andrew Schwab draws his inspiration both musically and artistically. These are 5 songs that aren't typically attempted for covers and, as said before, there was some danger involved in ruining most of these. Project 86 pulled the right punches at the right times and was able to make each of these sound great in different ways. The EP doesn't sound like a typical P86 album, although there are moments, and that lends a little more credence to what they were doing. If you want to hear the Influence EP, or unlock the planned double album with special artwork, hop onto Pledge Music and donate to their campaign. You will be immediately rewarded with this excellent EP while you wait for the rest of the music to drop.