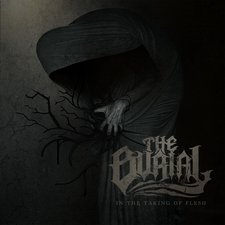 The Burial
In the Taking of Flesh

Champaign, IL's The Burial are one of the most exciting Christian metal bands to hit the scene in quite some time. Drawing from a vast array of influences both Christian and secular, their highly technical, progressive and brutal compositions are reminiscent of modern-day metal giants Becoming the Archetype, and even call to mind some of the legends of Christian metal, including Extol, Living Sacrifice, and (early) Embodyment. Indeed, The Burial would have been right at home among the late 90's Solid State Records line-up. The band's 2012 Facedown Records debut, Lights and Perfections, was as close to perfection as could be, exemplifying their technical prowess in addition to their finely-honed compositional abilities, and yet, in spite of the album's excellence, the band still went relatively unnoticed. The Burial have returned with yet another masterpiece in the form of In the Taking of Flesh, and hopefully now metalheads will begin to take notice and give The Burial the recognition they deserve.

In the Taking of Flesh is very similar stylistically to what was found on Lights and Perfections, but it is by no means the same album under a different moniker. Just within the past year, The Burial have made leaps and bounds in honing their craft, and they have refined nearly everything that made Lights and Perfections so great. A light orchestra of stringed instruments opens up "En-Hakkore," preceding the onslaught of death metal brutality that is to ensue. Vocalist/lead guitarist Elisha Mullins sounds as vicious as he did on Lights and Perfections, and his lead work here is just as impressive. What's more, all of the music and lyrics on In the Taking of Flesh were written solely by Mullins, making him a musical mastermind of sorts. Thinking about this fact while listening to In the Taking of Flesh makes this album all the more captivating.

Each of the songs on the album are strong in their own right, and often take unexpected and exciting turns, but the real centerpiece of the album comes in the form of the 10-minute title track, which is split into two parts: "Theanthropos" and "Diakonos." "Diakonos" is a fine example of how adept Mullins is at composing killer metal songs, beginning with an odd-metered guitar strum before unleashing a feral barrage of brutal riffs. "Theanthropos" reprises the melody in "Diakonos," and is a much more atmospheric track, building slowly into an almost droning section, and before fading away in a dark atmosphere. Take this chance to breathe, because "Wretched Restless Forms" and really, the remainder of the album, will grab a hold of you and won't let go, in the best possible way. Another highlight is the album's closer, "Quintessence," a purely instrumental "shred" track featuring several guest shredders, including James Houseman and Jack Daniels of Hope For The Dying.

Some metalheads will often classify secular metal and Christian metal as being incompatible with one another, but The Burial is yet another perfect example of how this gap can be bridged if the music is strong enough. There is more than enough here to attract an audience of anybody and everybody who loves metal, and perhaps The Burial's Christ-centered themes can reach those who need to hear the message of Christ proclaimed in a way which they can relate to. However, no matter what you believe spiritually, In The Taking of Flesh is an absolutely superb metal album that will end up among the best of the year.