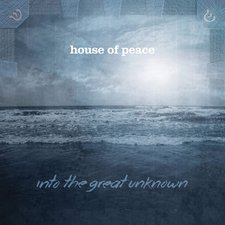 House of Peace
Into The Great Unknown


Into the Great Unknown is the debut worship album from newcomers House of Peace. The band first gained some recognition for having their work featured in the film The Identical. The 11-track album clocks in at nearly 50 minutes, establishing itself as a rather meaty project.

The album kicks off with "Passover Lamb," a more upbeat song which largely recycles lyrics from traditional hymns and other worship songs. Nothing about it is distinguishing, which, unfortunately, is rather prophetic of the rest of the album. "Break the Bread" and "King of the Universe" are both slightly above-average worship songs, remaining catchy and devout while getting the job done.

"Let Us Be One" is a good song, pulling its source material from Galatians 3 ("there is no Jew, there is no Gentile / there is no slave, there is no free / all we have is eternity / let us be one as You are one"). It has a strong melody and powerful message, but from a lyrical standpoint, it doesn't fit together as well as could be hoped. "Praise Your Name Forever" is one of the best tracks on the album. It features an impressive array of vocal harmonies while remaining simple in a pure form of worship.

From a personal standpoint, I connected with "Rejoice" and thought it to be a good standard for the worship industry. The lyrics are simple ("when trouble comes and trials rise / I will look through your eyes / when problems seem like they never cease / I will pray and get on my knees / I will praise the Lord always / rejoice, rejoice, rejoice") but flow well with the melodic vibe and rhythm. The album closes with "One Child," an orchestrated score which is definitively the best track on Into the Great Unknown. It is, simply put, a beautiful and quality piece of work.

At the end of the day, Into the Great Unknown is a good album, but there's nothing particularly special or unique about the project. The musicianship, while competent, fails to compensate for the somewhat generic overtones. Most of the melodic and lyrical structures feel a little bit too similar to other worship or CCM bands. In context, though, the market has been inundated in recent years with uniformity run so rampant that the bits of originality found here need to be praised. A few good songs make this album worth listening to, but don't provide enough support to pull Into the Great Unknown out of mediocrity.