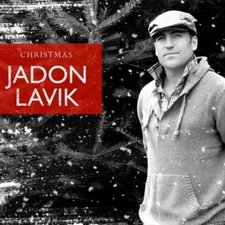 Jadon Lavik is a worship leader in Southern California whose radio friendly acoustic pop/rock has garnered him fame across the United States. Lavik burst onto the Christian music scene in 2004 with his debut album, Moving on Faith, on BEC Recordings and hasn't slowed down since. He is reaching more fans each year with consistent radio play and touring as well as leading worship at his church in California. This summer, he released his fifth studio album, Art and Soul, bringing more nationwide recognition with radio singles "Love" and "Shine."

Jadon Lavik's Christmas is an album chockfull of acoustic, bluesy renditions of Christmas traditionals (and one original) done Southern California style. The album begins with "Have Yourself a Merry Little Christmas" and Lavik's gentle acoustic guitar and effortless vocals float along to the jazzed up Christmas classic. Celebratory original "Hallelujah The Lord Has come" picks up steam with electric slide guitar forming it into an instant classic with the chorus "Hallelujah, The Lord has come, Emmanuel, our God is with us." A Dave Matthews influenced version of "Little Drummer Boy" features Lavik's bluesy guitar work and a horn section.

The simple piano arrangement of "I'll Be Home for Christmas" gives Lavik room to stretch his vocal range. He returns back to his acoustic pop roots with his takes on "Silent Night" and "O Come All Ye Faithful" that will be sure to find a spot on your Christmas playlist this year. Bringing the album to a close are the folk inspired "Go Tell It On The Mountain," the acoustic blues of "Joy to the World," and the Hawaiian Christmas song "Mele Kalikimaka" - complete with ukulele.

Jadon Lavik's Christmas will deliver yuletide joy and reflection on the birth of Christ for those wanting a slice of Americana with their Christmas celebrations.