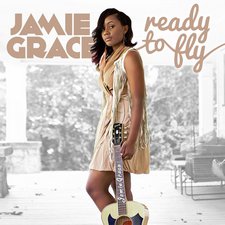 The youngest nominee of the 2012 Grammy Awards, Jamie Grace surely became Gotee Records' saving grace. The "acoustic-urban" approach of One Song At a Time was novel and represented an interesting shift for what a contemporary Christian pop singer could be. Less than three years later, Jamie's fanbase finally gets to hear her sophomore release, Ready To Fly, and they'll get exactly what they expected.

Rewinding a bit to Jamie's first album, listeners can recall a sense of young excitement and fun laced throughout every track. For Jamie's target audience, it worked perfectly, even if it often opted for the youngest side of the listening spectrum. A few years later, however, Ready To Fly is simply part two, functionally the same as before. In the years between both records, Jamie has grown up, and so have her fans; the issue with an album like Ready To Fly is that it lacks any mature growth and often tries to breathe life into songs no longer relevant to Jamie's stage in life. Jamie is twenty-two years old at the time of this album, but the essence of the album harkens back to what was probably Jamie's much younger self. "Just a Friend," for instance, finds Jamie longing for the attention of a certain boy that doesn't reciprocate; perhaps this did happen in Jamie's past, but she surely has more poingnant memories to write about for a release years later. "White Boots" touches on a similar theme, though instead of feeling anachronistic, it carries around an unconvincing metaphor for sexual purity ("I've got my white boots, my white dress/and baby, I ain't getting them dusty"). Granted, One Song At a Time was never supposed to be a particularly nuanced album either, but Jamie's selection of songs hasn't gotten deeper, just only wider.

As for individual tracks, it's worth mentioning here that the musical philosophy from the last album remains unchanged. With an "if it ain't broke, don't fix it" mentality, it's hard to blame Jamie for not doing much to evolve musically, though it makes each track here much less interesting in the long run. The only difference from the last album is the addition of producer Chuck Butler, who also produced Royal Taylor, which results in synth-laden tracks like "Beautiful Day," "To Love You Back" and "Always You," though these really aren't huge deviations from the standard setting. There's the bouncy tracks ("Little Ol' Me," "Do Life Big," "Every Bit of Lonely," "My First Love"), the slower ones ("Fighter," "The Waiting"), and it all follows a distinct pattern. Jamie has almost created a formula of her own, but because she follows it to a tee, the album lacks any surprises, pleasant or otherwise. The album is even topped off with a retread from the last album, "Ready to Fly (Avery's Song)," which doesn't improve much in its more finished form.

Again, it might sound mean-spirited to pick apart an album as sincere as Ready To Fly, and because it follows all the rules that lead to chart and radio success, it's hard to fault Gotee for its execution. But if Jamie is truly a great songwriter who yearns to grow as a professional musician, albums like Ready To Fly only serve to keep Jamie stuck in a creative rut. 2014 is more of the same from Jamie Grace, but in time, perhaps betters things are still to come.