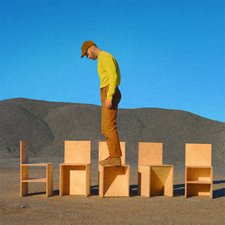 
Nashville-based singer/songwriter Mat Kearney is at it again with his seventh studio release, January Flower. Unlike CRAZYTALK, his (comparatively) electronic and synth-based 2018 album, this latest offering sees a simple, uncomplicated return to stripped-down, lyrically focused songwriting.

While Kearney's signature spoken word/hip-hop-esque flow is markedly absent from January Flower, longtime listeners are bound to hear a great deal of familiarity and nostalgia. And that nostalgia permeates the majority of the album's focus. It is no secret that Kearny is growing older, as are those of us who were his early listeners. As such, these songs present a candid form of self-awareness regarding the whimsical nature of love and youth and the sea in-between. In other words, a man in his forties singing about playing texting games with girls and taking the car out is deeply reflective of the fleeting nature of youth. Coadjuvantly, this approach necessitates a tinge of subtle melancholy sprinkled throughout the whole of the otherwise upbeat project.

While a surprisingly large portion of the album has already been released via half-a-dozen singles, it remains worth diving into the entire album in one sitting. Songs such as "Pontiac" explore the aforementioned nostalgia ("and we all pretend that we're okay / when we wanna say / take me back to the time when getting old was turning twenty-five / the single CD that you burned me, you played it back"), and others such as "Blame" offer a genuine and honest look at the struggles of love (with a hint of scripture and biblical confession): "I know that the Lord forgives me; that don't make it right / everything that lives in darkness someday comes to light / and all the times it takes away, I don't want to wait to wait to say / I'm the one to blame, I lost my way / and it still hurts to say 'I'm the one who changed.'"

The fairy tale imagery in highlight songs such as "Running In Circles" is poignant and tasteful: "The kingdom of summer made its legends in the fall / but you went away and left me prayin' for the frozen rose to fall / one heart needs survival and one heart holds the gun / with your hand on the Bible, praying for revival / but you ain't got no Savior's love."

The album closer, "Something Beautiful" is another highlight. The acoustic track paints a succinct portrait of love and brings listeners into Kearney's heart and world with a surprising degree of intimacy.

Ultimately, Kearney has crafted an album which is exceedingly simple in the best of ways. January Flower isn't likely to make a great deal of loud waves, but listeners who choose to hold their ear close enough will find a sweet offering.