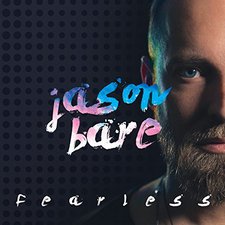 
Jason Bare may not be a household name like Chris Tomlin, David Crowder, or Hillsong, but he has been on the worship scene for a few years, achieving some radio success. With Fearless, his third album, he releases 12 radio-ready pop-worship songs to catch the ear of new listeners.

Lyrically, most of the songs are standard pop-worship fare with little color or personality to set them apart. Some songs show signs of promise, like "You Are" (which breaks the worship style to talk to the listener), "In the Silence" and "Wildfire," but the majority is average or below. What elevates this album, though, is its music and theme. Bare takes a pop/rock sound and occasionally tinges it with some electronica, accenting the songs and adding a catchy hook. The title-track and "Miracles Happen Here" benefit from this in particular.

But the theme, and how it plays out on the album, catches my attention most. Fearless wrestles with the times of doubt and darkness in a believer's life without ever getting overcome by it. "Following You" opens up with a commitment to be Christ's disciple, but the title track that immediately follows hints at the rough road of faith and proclaims trust in the One who can steady the tide "when my soul is raging." The rest of the album more or less successfully deals with the tension between light and dark, but by the end, Bare confidently asserts that "we're only getting started."

This may not be the deepest worship album to release this year, but the choice to lay his soul bare and wrestle with his doubts is an honorable one. If you're looking for a light, fun album to keep you encouraged and upbeat, without too much sugarcoating, Jason Bare's Fearless may be right for you.