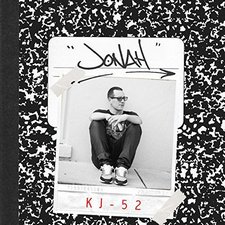 
The boy named Jonah, the plain white rapper whose name no one pronounces correctly, the veteran of CHH veterans...none other than KJ-52, is back! If you have followed the rapper over the past year or so, you are familiar with the bad experience he had with record labels, and thus we have his very first independently released album, simply titled Jonah. So with KJ having full creative freedom for what this record is like, let's see what he chose to release with his eleventh album.

The first track is "Hold On," which carries a nostalgic and reminiscing feel to it. KJ speaks to his younger self in a very honest way, with words like "too white, too broke, no talent, no name," while reminding himself to hold onto God to make it through. Up next is typical KJ fare with "Get Down Get Down," a fist-pumping track worthy to be played at any house party. We get a small glimpse of the humor that the rapper is often known for as he raps a few verses about the time he was mistaken for TobyMac. Some fans may notice that the aforementioned humor is not as prevalent on Jonah as it has been on former records. Perhaps this is a new direction for KJ or maybe it's simply due to the fact that there are only eight tracks on this release. We'll have to wait for his next album to know for sure.

As always, KJ is very focused on bringing God glory on each album and this time is no exception. "Best Day Ever" speaks to having gratitude to our great God while "More of You Less of Me" is an anthem of God's awesomeness. Both tracks have solid production and will be fan favorites for sure. The two best songs on this short sampling would have to be either "Nah Bruh" or "Know About It." The former is straight banging rap as KJ collabs with Canon and B Cooper to make an amazing rap joint, while the latter features Derek Minor with tons of hard spitting lines, such as "dropping light for the world like we're Edison."

All in all, this release is pretty much what longtime fans of KJ were expecting. There's not as much of those corny/clever tracks that we saw in the past, but the theme is God focused, the album is fun, and it's worthy to be added to the KJ discography. It is a rather short album (only eight tracks) that barely hits thirty minutes, but the song choices are on-point for the most part. Fans of hip hop and KJ-52 won't be disappointed with this grand opening of the independent start of KJ's musical journey.