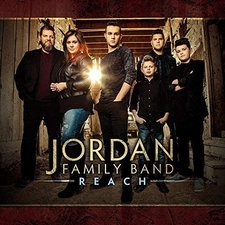 
The Jordan Family Band, hailing from Georgia, is a southern gospel/country group consisting of four members of the Jordan family and one of their closest friends. Having gained some traction from their 2017 album, Joshua 24:15, the group has released their new album, Reach. Regrettably, confusing production and poor songwriting holds the album back from being something recommendable.

Throughout the album, there is a lot of heavy-handed auto-tuning that is handled so poorly at times that it is nearly comical. Almost every time a male is given a solo performance, it is problematic--preeminently so during vocal runs. The auto-tuning also amplifies the more nasally vocal offerings of the album and can be cringe-worthy in parts. This issue persists across the entire project to some degree and drags the entire album down.

The track Heaven is Just a Memory Away, an attempt to be a sweet song about missing a loved one who has died, contains a chorus that is a mixture of confusing anecdotes of how the songs protagonist thinks about heaven. It ultimately concludes with the cryptic muse, Its more than a place/Heaven is just a memory away. The song No Lack of Love is incredibly repetitious with its title phrase and has some very awkward wording with lines such as, And what they had was plain to see/They had plenty of and Do as you like to be done to. The grand finale of the album, Old Glory Waves pleads Let the symbol of truth/Be the Red, White, and Blue in a way that comes across as patriotism-turned-idolatry, blurring the lines between praising God and praising the country.

There are minor flashes of positivity on Reach. Randa Jordan has a lovely voice which stands out best on the track Call on Jesus. The song You Better Get Right (or Ya Gonna Get Left) is a toe-tapping upbeat southern-gospel standard. Also, for the most part, lyrically the album does try to focus on strengthening the weary and reaching out to those who are needy. It is disappointing that the songs themselves dont rise to the occasion.

It is truly heartbreaking to hear such a genuine, legitimate effort to minister to people fumble in this way. The album feels sincere in its pursuit, but is lamentably unable to capitalize musically in any remarkable way. Hopefully they are able to hone their craft more finely in the future.