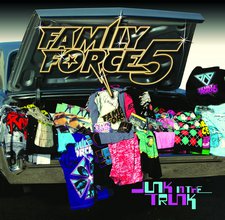 I'm not gonna lie: Family Force 5's latest album release, III, was somewhat of a letdown. Fans missed the band's classic hard rock sound complete with heavy guitars and party-rocking beats. Luckily, FF5's just put out a new collection of rare and unreleased songs on their PledgeMusic page for eight dollars. It's called the Junk in the Trunk EP, and it completely fails to disappoint.

The first two songs are demo versions of classics "Kountry Gentleman" and "Numb." These demos may seem like just filler tracks (and may only be appreciated by fans that don't already own the band's first album), but they do give an interesting look at how the songs came to be. Plus, they're quite awesome songs anyway. The next song, "Color of Water," is an interesting fast hard rock tune from the band, and surprisingly for them, has some quite meaningful lyrics about God's love for us. The heavy guitar melody doesn't hurt, either.

"Master of Disguise" is typical FF5 material about going to parties and making boyfriends jealous. The lyrics are anything but deep, but the guitar melodies are pretty infectious. The last song is "Gold," a never-before-released worship song from the band. It's surprisingly mellow - lovely acoustic guitar and a calming beat in the background accompany Crouton's singing of how God's love is like walking on streets of gold.

Family Force 5 may have disappointed a bit with III, but this EP easily raises the FF5 bar back up. My only gripes are the relatively high price to pay (8 dollars for 5 songs) and the low quality of some of the songs, but overall, this is an excellent look back at the band's career. I'm looking forward to what they have in store for their next album!

Family Force 5's Junk in the Trunk EP is a long overdue official release of several fan favorite b-sides and demos. Of these five, one of the best and most recognizable is the "Color of Water" (most likely the demo version), a song that was meant for their debut, Business Up Front, Party in the Back, and had even appeared on the pre-release for the album before they decided to swap it out for "Replace Me." It's a song they even used to open shows with, so it's great to finally see it make it into the fans' hands. "Master of Disguise," which was written for the Dana Carvey film of the same name but never used, is simply a fun one, while the demos of other recognizable songs, as well as a really rare pop ballad called "Gold," wrap it all up. Diehard FF5 fans need this EP, while casual fans shouldn't worry about it. Junk in the Trunk EP mostly represents FF5 history, and it's a fun little blast from the past. - 2/15/12, John DiBiase of Jesusfreakhideout.com