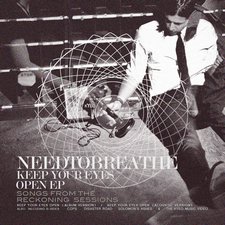 Last year, Needtobreathe found universal applause from secular and Christian markets alike with their latest studio album, The Reckoning. The signature southern sound returned, but this time with a darker edge. Hard-hitting rock songs and slower indie-flavored tracks flowed together to create the second best album of 2011, according to the JFH staff. This September, the band packaged up three tracks that were left on the cutting room floor with two versions of "Keep Your Eyes Open" and a music video to make the Keep Your Eyes Open EP.

The EP opens with its namesake from The Reckoning. The music video to this track is also included. Chances are, the majority of fans that are going to dish out $3.99 for this release already own this track, but the music video might be a nice perk. The acoustic version that follows is where the real gems begin. The original song was one of the heavier ones on the full-length, so this was a good choice to give the acoustic treatment to. In addition to the stripped down sound and brief solo two minutes in, Bear Rinehart adds some nuances to the vocals to make the acoustic version a nice companion to its full-band sibling.

The three new tracks are what most fans will buy this EP for. "Cops" and "Disaster Road" were previously released on the limited edition vinyl of The Reckoning. "Cops" is reminiscent of the edgier songs from last year, like "Maybe They're On To Us" and "Oohs and Ahhs." The passionate vocals and wailing, siren-like guitars amp up the theme and energy quite a bit. The only small grumble would be the thin lyrics, which rely mostly on repeating the bridge and chorus; "I'm a failure that's for sure, just like everyone I know, I'm tired of being chased by all these cops." "Disaster Road" is the other track that only the vinyl aficionados have owned so far. The beautiful and poignant narrative make this song stand out more than anything. Don't let the perky acoustic guitars fool you, "Disaster Road" could potentially be the most heart-wrenching song Needtobreathe has released so far; "So excuse me darling, while my heart explodes, I'm in the cage I've chosen, because it feels like home, I should have seen this coming a million miles ago, I've been blindly running down disaster road." The final track, "Solomon's Ashes," is a brand new track exclusive to the Keep Your Eyes Open EP. This sounds more like a song that would be found on The Outsiders, more upbeat with a hint of a spiritual message.

Even with its few hiccups, the Keep Your Eyes Open EP is another homerun for Needtobreathe. Considering these were the tracks left off of last year's stellar release speaks volumes about these guys' talent. This is a must-buy for fans of the band or southern rock in general.

EPs are a lost art. That's not to say they're rare; if anything, there's an overabundance of EPs today. But the original purpose of an EP was to be an accompaniment to a full-length album. And as such, Keep Your Eyes Open EP: Songs From The Reckoning Sessions is one of the best to come along in quite some time. Offering one song from The Reckoning (the EP's title track), two b-sides previously exclusive to the album's vinyl release, an acoustic version of "Keep Your Eyes Open," the music video for the album version, and one never-before-heard b-side, this EP is like a delicious, massive sundae to top off a satisfying meal. "Keep Your Eyes Open," with its driving beat and catchy composition, is arguably one of the best songs on The Reckoning (and a personal favorite), and given that you can get it plus four other tracks and a music video for only $3.99 feels like a gift to the band's fans (Realistically, it should be $6.99). These three songs could have easily fit on The Reckoning (but, alas, a seventeen-track album would have undoubtedly seemed excessive), and each one included here is better than most artists' b-sides, which certainly says something for NEEDTOBREATHE's skills. But when I firt heard "Cops" on the vinyl, it pained me then--and still pains me to hear it here--that it was left off the full album. Given The Reckoning's explosive and commanding opening track, the bulk of the rest of the album was pretty mellow in comparion; including the rocker "Cops" in the mix would have helped to balance that out a bit. "Solomon's Ashes" almost sounds like something that could have been on Daylight, making it seem the obvious cut if only for the different stylistic feel, but there isn't a single bad song in the bunch here. If you're a fan of NEEDTOBREATHE, this EP is worth every cent. If you're just getting into the band, it's still worth it, but you should really check out The Reckoning first. For what it's purposed to be, Keep Your Eyes Open EP is about as perfect as an EP can come. - John DiBiase, 9/22/12