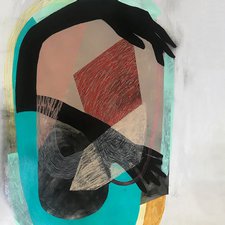 
Like many an aspiring musician, Jon Guerra started making music in high school, but it wouldn't be until after college (2009) that he truly began his career in earnest. After forming various bands with several albums released among them, his first full-length solo album, Little Songs, was released by Essential Records in 2015. It was here that his career began to more fully takeoff, helping him score the job of composing music for Terrance Malik's 2019 film Hidden Life. Now in 2020, Guerra drops his second album, titled Keeper of Days, and it's a fine contribution to the canon of modern worship music. However, this is not your typical congregational worship album. Musically, there are elements of folk, indie-rock, and chamber pop all anchored by masterclass lyricism. These songs have a depth that would behoove listeners to wade into slowly and immerse themselves while reading along with the lyrics throughout several spins. The time investment will be worth the effort.

Describing his music as "less Sunday morning worship music and more Monday morning prayer music," Jon Guerra takes listeners on a journey, and these prayers (songs) are the map. This devotional music is a refreshing spin on the more commonly bombastic offerings typical of the modern worship genre. These are deeply heartfelt tunes made from, and for, quiet contemplation. Many of the vocals are whispered and the music subdued, but just as you think you've pinpointed the album, Guerra slides a small change in musical direction to keep you engaged. His instrumentation is top-notch, vocals clear, and lyrics haunting.

Immediately arresting are the lyrics of the first three tracks, with "Citizens" packing the biggest gut-punch with lines like, "I have a heart full of questions/Quieting all my suggestions/What is the meaning of Christian/In this American life?" Later he admits to the full range of emotions from confusion and anger to feeling used, over the treatment of the least of these, pleading in the chorus, "I need to know there is justice/That it will roll in abundance/And that you're building a city/Where we arrive as immigrants/And you call us citizens/And welcome us as children home."

Other highlights include the taunt male/female harmonies carried by the low-key late-night guitar-picked tune, "Tightrope," with lyrics that cut to the heart like, "Teach me to fall in your direction/Teach me to hitch my heart to yours/Give me the mind to know the difference/Between the cart, the cargo and horse/Teach me today I still need saving/Show me the measure of your grace." The short and sweet piano-led "This Is What I Do To Feel Close To You" is a tender call to rest, while "Prettier Than Solomon" starts slowly while slipping into a trippy reminder that believers need not worry about the cares of tomorrow. "Simple Praise" sounds weary yet resolute, as Jon expresses exhaustion, "Lord, I'm tired/Tired of highs and loud displays/Speak simple truth/And I'll respond with simple praise." Lastly, of note is the simmering and satisfying build of "Love Goes On." It's the musical conclusion the album calls for, with last track "Keeper of Days" acting as a coda of sorts to bring the journey to a close with a trusting admittance that, "I do not understand your ways/Yet, still I know you are the keeper of my days... I give you praise."

After countless listens to his newest album, Keeper of Days, it's clear Guerra didn't come by these fourteen tracks easily, but the result of the struggle, the grief, and the doubt has borne a richness in the offering. This album is dense, a true highlight of 2020, and should grab the attention of listeners who enjoy the musical approach of artists like John Van Deusen, Chris Renzema, and Young Oceans. After two full weeks of listens, this one has jumped into the top 3 albums of the year for this reviewer, making a serious play for the top spot. Those looking for a much-needed dose of Kingdom-minded inspiration and encouragement, look no further than Jon Guerra's Keeper of Days.