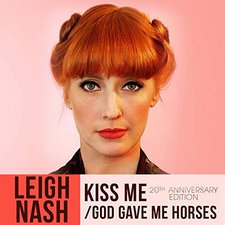 
Recently, until the controversy surrounding PledgMusic's operations caused a great deal of problems for many indie artists, Leigh Nash had enlisted the help of fans to help fund new solo music from her. In the fallout of the PledgeMusic debacle, the beloved Sixpence None the Richer vocalist is now planning to release a series of singles that will eventually accumulate to a new studio album. The first of these singles is a pair of songs that come to us on Good Friday, "Kiss Me" (20th Anniversary Edition) and "God Gave Me Horses."

Given that Sixpence None the Richer released their self-titled album that contained the smash hit "Kiss Me" back in 1997--now almost 22 years ago--releasing a "20th Anniversary Edition" of the song in 2019 seems a tad odd. Even after an initial listen to the new version of the song, some may want to ask the question... but why? There isn't much extremely different about this updated version, but that's actually probably for the best. Leigh even recaptures the sweetness in her vocals almost exactly as they sounded over two decades ago, but this new rendition, overall, offers a crisper, slightly livelier, and more modern production. At times, new takes of older songs can sound much too different, losing the edge of what fans liked about the song originally ("Feel Good Drag" by Anberlin immediately comes to mind negatively, while Switchfoot's "Dare You To Move" remake is a good example of an improvement). The only other differences that stick out are some additional "La la la's" by Nash, which she has added to her performance of the song live throughout the years, and a more electric-guitar driven melody and guitar solo. Her layered vocals and that signature tender accordion all make it to this new version as well, adding up to a really nice revisit of Nash's biggest hit.

The second song, "God Gave Me Horses," is something completely different. In 2015, Leigh released a new solo album, titled The State I'm In, that saw the singer dabble in her southern roots. "God Gave Me Horses" continues this exploration of country music as she uses the genre to tell a bittersweet tale of a man who found a new passion for life while tending horses in prison. "Sometimes you don't know what you need till you get it. I didn't know what to ask for, so I didn't," Leigh sings over a galloping drum beat and a twangy guitar. The character in the story talks about caring for the horses, the animals being his best friends, and how caring for them is healing for him. The chorus adds, "The state gave me 18 months, but God gave me horses," choosing to focus on the silver lining of his situation. It's a lovely song that gets better with each listen, even if the genre isn't your usual cup of tea.

These two songs together don't make a whole lot of sense stylistically or even thematically (I actually expected this version of "Kiss Me" to also be a country song upon hearing of this double single release), but this pairing does a fine job of showing listeners where this veteran singer/songwriter has been, and where she's going. And I can't wait to hear more from Leigh Nash.