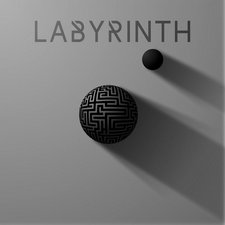 
Not often is it that you come across an album that is like salve to an open wound. The beauty and tranquility that transcends David Baloche's debut album Labyrinth, which is the first in a series helmed by executive producer Paul Baloche (his father), presents unique musical arrangements using various translations of the Holy Bible. Baloche's first offering focuses specifically on Scripture that addresses anxiety and stress. At times, the album walks the delicate balance between being just another poetic outlet and being a vessel that ushers one into a place of contemplative worship and ultimately an encounter with an all sovereign God. It is into this place that Baloche hopes to lead listeners.

The album opens up with the Psalms 55:16-17 inspired track, "He Hears My Voice." The contemplative strumming and hopeful, ambient lyrical delivery set the tone for much of the rest of the album. Baloche, a New York based high school teacher, impressively plays the piano, guitar, clarinet, and trumpet on the album, showcasing his vast musical talent. Often the music takes on the sound, through the power of its ambient post rock like sensibilities, of a lower key Ascend the Hill. This is really showcased well in the fourth cut on the album, "Green Pastures"--a song based on the twenty third Psalm. It begins with a majestic piano intro and expands into a musical landscape that would make any die hard indie rock fan happy.

The second half of the album opens much the same as the first as the acoustic guitar dominates the intro of the Isaiah 40 inspired "Those Who Hope." The first real musical curveball gets thrown with the album's seventh track, "Groanings Too Deep For Words" (which is based on Romans 8), as the opening loop makes it sound as though Gawvi has stepped behind the mixing board. It's an interesting foray into a slightly different soundscape that still adheres to the album's focus on the scriptural content and offers the album's one break in tempo, which is probably the one drawback to the album as a whole. The album concludes its journey with the track "My Help Comes From The Lord," with which Baloche ties the album together in its entirety with the acknowledgment that no matter where he is in his life, no matter the stress or anxiety, he will "lift his eyes to the mountain" and "not fear for you know I am your God."

All in all, aside from the lack of tempo variance, David Baloche's Labyrinth is a contemplative, ambient work of art that could be enjoyed in either corporate or private settings.