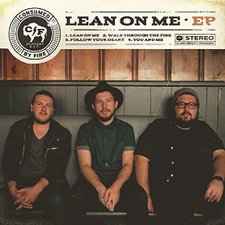 Consumed By Fire
Lean On Me EP


Listening to Consumed by Fire's latest release, Lean On Me EP, is like getting a letter from an old friend. Equal parts unexpected and uplifting, these four tracks carry a charisma meant to bring a smile and a message intended to keep it around. While it is short, clocking in at just over 13 minutes, Lean On Me is an enjoyable collection of songs that primarily serves to showcase the group's creative songwriting capabilities.

The EP opens with "Lean On Me", the album's ultimate centerpiece. With simple guitar and piano laced with whistles, claps, hums, and full brass accompaniment, the title track is obviously the reason for the release. It's catchy and relevant, resembling much of mainstream pop/rock radio while boasting enough individuality to stand out from the humdrum crowd. But perhaps most importantly, it provides worthy validation for a band who so apparently enjoys making music and maintaining a benevolent message. From the start, lead singer Caleb Ward belts out encouragement with the slightest of southern draws: When you don't have the words to explain the hurt / You can lean on me". It's a simple but poignant lyric, principally meant to uplift and paired with the perfect music by which to do so.

Yet, with such an outstanding opener the rest of the tracks seem to struggle under its weight. "Walk Through The Fire" and "Follow Your Heart" are passive efforts, displaying the group's vocal talent alone rather than a composition of parts and foregoing impact as a result. The release concludes with "You And Me", a song that is both more of the same and a partial reflection of the inspiration that the EP initially displayed. All things considered, the album structure is understandable if not utterly necessary. In the relative flatness of the latter tracks "Lean On Me" shines all the brighter, further promoting what may be the band's most exceptional work to date.

All in all, Lean On Me is a testament to the Oklahoma-based three-piece's ability to craft radio worthy hits. Within the release "Lean on Me" is the heartening letter, filled with purpose and inspiration, and the other tracks are the envelope in which it arrives. In the end it may be for the best, as all pieces play their part and the message is delivered loud and clear: Consumed By Fire are a band to watch.