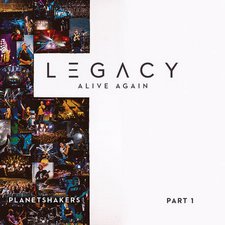 
For twenty-plus years, the members of the Melbourne, Australia-based worship outfit, Planetshakers, have been performing praise-oriented music aimed primarily at those in the youth audience. On their latest release, their thirty fourth, the group offers up a quartet of tunes recorded live in Manila, Philippines and Kuala Lumpur, Malaysia.

The leadoff cut on the EP, "Alive Again," bursts forth in a bright and brilliant surge of melodic, hook-filled goodness sure to elevate the spirits and quicken the pulses of all but the most finicky of power pop aficionados. Interestingly enough, the stellar opening track works as something of a double-edged sword. On the one hand, its irresistible energy and impeccable pop sheen draw listeners into the proceedings almost immediately, which, one could argue, is the hallmark of any good pop composition. On the other hand, though, it sets an incredibly high water mark that renders it exceedingly hard to replicate, which, as it turns out, winds up being the case.

This isn't to say that the remainder of the album is completely devoid of merit. The staccato rhythms of the tuneful, EDM-leaning "Drawing Closer" are undeniably bracing and the song, itself, very nearly reaches the vaunted heights achieved by the opening number. Likewise, the closing ballads, "You Are Here" and "All on the Altar," are pleasing enough and certainly provide a nice counterpoint to their more brisk counterparts.

Even so, each of the three of the cuts that follow "Alive Again," particularly the ballads, carry with them the distinct sense of having already heard far too many songs like them prior to spinning the record. All of which means that, while fans of the soft, mid-tempo worship-based fare that currently dominates the airwaves will undoubtedly get plenty of what they're hankering for here, those looking for something a bit more off the well-trodden path will find the Legacy - Part 1 EP initially promising, but only intermittently able to deliver on that promise.