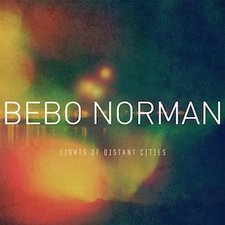 Tiny Watershed Records, founded by Caedmon's Call lead singer Cliff Young back at the beginning of the century, only released a few records in its short tenure. But their small roster of two artists, Bebo Norman and Andrew Peterson turned out to be keepers, and both have released career best works this year.

Lights of Distant Cities surrounds Bebo's always solid songwriting with atmospherics that lift the songs to stratospheric heights without losing his trademark lyrical intimacy. The opening title track repeats the word "mystery" to great effect and marries the song (and album) theme of searching to swirling production (with a similar feel to Coldplay's Viva La Vida or U2's The Joshua Tree) and sets the table for the selection of songs that follow.

In "The Broken," Norman furthers the theme of man's distance from God when he says "God of the universe, do you hear the cries that pour out from all the earth? Can your hands of glory reach out and heal the hurt of the broken?" The idea of healing has been a constant in Norman's last few albums (such as in "I Will Life My Eyes" from 2006's Between the Dreaming and the Coming True) and it runs all throughout Distant Cities. A key to where this healing comes from is mentioned in the next song "At The End Of Me" where Norman states "that at the end of me is where you begin." "Sing Of Your Glory" serves as a nice break from all the questioning and offers up a heartfelt worship tune that breaks the sometimes gloomy (if appropriately so) mood of the album.

For those who wish Bebo Norman would return to the folksy roots of his first few albums, he manages the neat trick of adding texture and production to his acoustic guitar strumming on many tunes like "Daylight Breaking" and "World Gone Dark" and makes it all gel seamlessly. Album highlight "Outside Her Window Was The World" sounds like mixture of the late Rich Mullins and an 80's era Cure record, using aggressive guitars and synthesizers to tell the story of a young girl's struggle with cutting and subsequent spiritual awakening.

As a solid and holistic artistic statement on searching for God in this fallen world, Lights of Distant Cities is one of the year's best albums and a mid-career triumph for Bebo Norman.

One of the most frequent complaints about Contemporary Christian music is a lack of genuineness. Countless songs with the same basic lyrics, song structure and message are available to you at the turn of a radio dial. Bebo Norman has been one artist that has dodged this label with his consistently passionate, transparent lyrics for the past 16 years. His newest release, Lights of Distant Cities, continues this trend with his remarkable songwriting and memorable collection of music.

The album is split between the slower songs and the more upbeat ones that have become more and more common with each release. The mellow tracks work the best, with Bebo's voice coming out like a desperate plea. The vulnerability here is what shines. In "Collide," Bebo asks, "How long must we hold on, before grace and gravity collide?" In the closing track, "Go With You," we hear more of the brilliant writing, "You put your hand in mine, just as the rising sun breaks through, You see I don't care where we're going, I just want to go with you." The faster songs are well written and performed, as well. The title track and "Outside Her Window Was the World" are the standouts among the rest. Both of these sound especially unique compared to the past albums.

Overall, Bebo Norman's tenth full-length is another solid release. While I wouldn't call it his career best, it is perhaps his most assessable album to date. - Jerold Wallace, 10/13/12