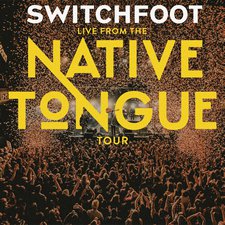 
It's often said by music critics that certain songs will "sound better live" than they do on the album. This is an old cliché, but as is often the case with clichés, there's truth to be found inside of them. And in concert, the songs from Switchfoot's Native Tongue album indeed sound bigger and more forceful in their live setting.

Swichfoot has long been one of the best live bands going, with Jon Foreman and the fellows extending song lengths, changing up rhythms and preaching up a storm in their own unique way. True to form, the band kicks off their latest (too brief) live EP with Foreman playing the manic street preacher and urgently conveying Native Tongue's thesis statement that hatred was not mankind's original language, but that we were originally designed for love. The title track then proceeds to boom out over the crowd with a greater force and presence than the recorded version; the guitars are more aggressive and the drums and tempo more powerful. The song's funky breakdown and distorted guitars are icing on the cake.

It's likewise with the formerly poppy "Voices;" gone is the sheen of the recorded version, and in comes the stuttering alt-rock storm of the live translation. Foreman's rhythmic flow is on point, and the band whips up an impressive sonic frenzy behind him, including a nifty plucked and distorted lead guitar line. "Let It Happen" is a song that also fares better live, though it's still not the powerhouse opening number the band wishes it was.

"Take My Fire" falls in the same category; the performance by the band is electric (music pun fully intended), with lead guitarist Drew Shirley turning in a magnificent, organized wall of distorted guitar. It's a wonderful, magnetic performance of a mediocre song that nevertheless shows the band at its synchronized best.

The closing, acoustic "All I Need" features the entire band around one microphone with minimal instrumentation (and copious amounts of tambourine), before the band returns to their stations to bring the soaring song to its climax. It's a great closing number, and the kind of urgent anthem that Switchfoot excels at writing (think "Live It Well," "Dare You To Move" and "Where I Belong"). Alas, the EP ends with an odd, tacked-on album version of the title track which mars the feeling and mood that the live tracks created.

A full concert album of the Native Tongue Tour would have been lovely (a la' the band's Live In Chicago live album from the Looking For America Tour), and here's hoping that one is around the corner. Switchfoot is one of the hardest working bands in any genre, and their live shows and performance acumen have grown legendary over the years. This EP may be slight in its track listing, but it packs a wallop.