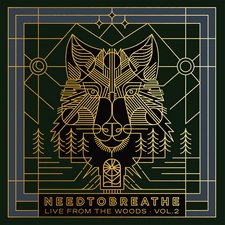 NEEDTOBREATHE
Live From the Woods, Vol. 2


True live music is still a rarity these days. With our current predicament entering into its second year, live venues, be they theaters, restaurants, amphitheaters, or coffee shops - are still mostly shuttered on some level. So new live albums have a unique place in the musical landscape at present, reminding us all at once what was and what will be (Lord willing) again.

And what better band than NEEDTOBREATHE to lead the way? These southern rockers have been one of rock and roll's premier live acts for more than a decade now, and with a new album's (last year's fantastic Out Of Body) worth of songs to play, the fellows in the band don't disappoint. With Live From The Woods Vol. 2, NEEDTOBREATHE rocks, rolls and testifies in equal, noisy measure.

Charging out of the gate with the epic, galloping "Mercy's Shore" (a great opener on Body, too), Bear Rinehart and the boys light up the stage and monitors with a full band sound that brings the new songs to life, and recharges some old favorites, too. Second song "Prisoner" harkens way back to third album The Outsiders, while foot stomper "Feet, Don't Fail Me Now" and the thunderous "Great Night" are some of the more raucous entries from albums in-between. The energy of this opening slew of songs could easily light up the county the band is playing in.

Things slow down for a breather with the elegant "Banks," a moving love song from lead singer Bear to his wife. In a poignant introduction, the singer skillfully unpacks the song's central metaphor of relational love being like a wild river and the riverbanks that give the water structure. It's a beautiful image and matching song, and the band capably handles the gentle tune with grace. The following, worshipful tune, "Garden," bookends the mid-concert slowdown nicely.

But it's the band's choice of cover songs that boost the album from great to magnificent. In short succession, the band tags the Rolling Stones' "Honky Tonk Women" onto the end of "Riding High," weaves the Beatles' "With A Little Help From My Friends" into their own fantastic ode to brotherly love, "Brother," and ends the countrified "Survival" with Sam Cook's iconic civil rights anthem, "A Change Is Gonna Come." That's a Rock and Roll Hall of Fame lineup, and NEEDTOBREATHE handles it with aplomb.

Live From The Woods Vol. 2 is a triumph of a live album, catching a complete night's work from this veteran band (by stitching together performances from a weekend in March, 2021), and reminding the listener what a true gift live music can be. May it come back in full force soon.