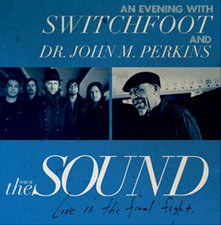 Switchfoot has always been a respectable band both within and beyond their music. They've been making solid rock records for the past 15 years, but they are also known to be a group that constantly gives. On September 29, 2010, the band performed a benefit show for the John M. Perkins Foundation, and the giving continues to this day as you can now download the Live at John Perkins Benefit EP by donation (or for free). The EP itself is a short but sweet set of live tracks with some tasteful and unique musical touches.

"The Sound" naturally leads off the EP (the song was inspired by Perkins, after all). It captures the signature live spark of the song very well, and is topped off with a strong guitar solo. At this point, the EP takes a softer and more emotional turn. "Your Love Is a Song" is bolstered significantly by the choir that sings throughout the performance, especially in the later parts of the verses and the chorus, while "Dare You To Move" also captures Jon Foreman's live presence very well with his occasionally spontaneous vocals.

These three tracks are all great live renditions, accentuated by the many voices of the backing choir. The choir is used a little sparingly at some points, especially on "The Sound," but the choir's parts consistently bolster the songs' musical impact. The later parts of the "Your Love Is a Song" verses come out especially beautiful, and the many voices singing "Dare You To Move" sound simply wonderful.

All things considered, the Live at John Perkins Benefit EP is a great release. Considering it's offered for free or by donation, it's hard to be too picky. Even so, although there are only three tracks, they are all performed as strongly and passionately as you would expect from Switchfoot, while the backup choir offers a great touch of extra vocal power. Switchfoot fan or not, you should head on over to switchfoot.com and download the EP now, and contribute whatever you can financially to the work of a worthy cause.

Live at John Perkins Benefit EP is a nice little gift from the Switchfoot boys to their fans. Recorded at the "John M. Perkins Benefit Show" in 2010, it's a great snapshot of that night and of the event, but taken out of context, it probably isn't quite as easily appreciated. For the three songs, a guest gospel choir provides backing vocals, which may have been powerful in a live setting, but for those listening in, it just sounds out of place and doesn't mesh all that naturally. Still, one can't complain too much about getting three great live songs without a penny dropped (unless you want to give a donation), and fans of the band--and especially these songs--shouldn't miss this EP. - 2/14/12, John DiBiase of Jesusfreakhideout.com