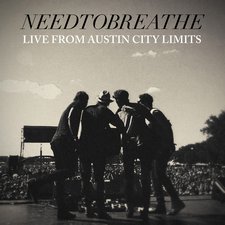 From the rolling foothills of North Carolina, came a very accomplished and promising rock band that we have known as NEEDTOBREATHE. Five albums into their career, they have left a lasting impression on the Christian music scene with their excellent songwriting and energetic live shows. With that, they have decided to put out a free live EP called Live from Austin City Limits and it goes to show how NEEDTOBREATHE has become such a success over the years.

The one thing that I have noticed about NEEDTOBREATHE is how much spirit and determination they put into their live shows. They are not just an ordinary band up on stage; these guys put every bit of their talents into their shows and try to make an impression on every person in attendance. With songs like "Difference Maker" and "More Time," the band tries to reach out to their fans by putting a lot of emotion behind what they are trying to tell the audience while not being too "preachy" or too "plain" with the messages they are trying to get across. While songs like "Devil's Been Talkin'" and "Keep Your Eyes Open" have shown much of the exciting side of the band, they also excite the audience with very catchy tunes and solid lyrics.

Of course, this may not be the best live EP they have put out (it's also a shame that this wasn't any longer than four songs), but it aptly showcases NEEDTOBREATHE as a band that is not just good in the studio, but just as good live and on stage. For everyone that is unfamiliar with NEEDTOBREATHE shows, they should check out this EP and see how incredibly gifted each member is and how they work together to play masterful shows that have impressed and inspired people for over 14 years.