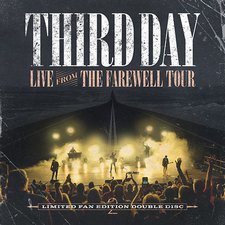 
Third Day has been one of the biggest names in Christian music for two and a half decades. Coming off the heels of one of their best albums, Revival, the band unexpectedly announced that they would be hanging up their hats to focus on solo projects. To cap off their prolific career, the band announced a nationwide Farewell Tour along with a double live album to commemorate it. Live From The Farewell Tour was recorded across multiple nights and in different cities, giving the listener the feeling that they are accompanying the band through their last triumphal run.

The album starts out with an explosive rendition of "Consuming Fire" from their self-titled debut, before transitioning into "My Hope is in You" off of Conspiracy No. 5. Scotty Wilbanks, the live album's producer and Third Day's long-time touring keyboardist, strikes a superb balance between the crowd and the band, especially the vocals. However, bringing the guitar and bass more to the front would have done a better job encapsulating the live energy that Third Day is known for. Even with a few member changes throughout the years, Mac and the boys have not lost a beat when it comes to their sound. Mac Powell's booming baritone sounds as flawless as it did on their first live album, and Mark Lee's guitar playing has only gotten better with age.

With such a lengthy career, Third Day has so many songs to choose from, and they do an outstanding job of selecting a wide variety for this album. Hopping through their discography, a song or two is included from just about every album. This arrangement is sure to please new fans and Gomers alike. From the rockin' "Otherside" to the worshipful "King of Glory," the whole scope of Third Day's sound is covered within this tour and accompanying album. New renditions of time-honored songs are also prevalent: "Thief" gets a complete makeover and "I've Always Loved You" feels like it was pulled right off one of Mac Powell's country records.

The amount of banter between songs does become a little tiresome on repeat listens; both "Cry Out To Jesus" and "Revelation" have lengthy intros but are at least separated into their own tracks so they can be easily skipped. Finally, three medleys finish off the album. Third Day's classic "Blackbird" transitions well into the tour-appropriate "Gone." "The Farewell Medley" is the longest song on the album and gives a good mix of hits that the band didn't have time to play in full. In a fitting end to the night (and the tour), the concert staple "God of Wonders" is paired with Michael W. Smith's "Agnus Dei." Third Day has always treated their concerts as a worship service, and their final tour and live album is no different.

Third Day's final show appropriately occurred in the band's birthplace of Atlanta, Georgia. Making sure that their hometown congregation gets involved, Mac encourages the Atlanta crowd to join in and sing with the band for the last time. As "Agnus Dei" fades out, fans are left with a hopeful message from the band: "We'll see you down the road sometime." Until that day comes, Live From The Farewell Tour stands out as a great live album and an exemplary showcase of what Third Day has given fans for decades.