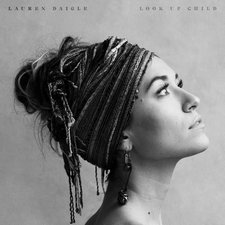 
Following up a huge hit debut album is one of the trickiest propositions in all of popular music. Artists as diverse as Hootie & The Blowfish, Jars Of Clay, Alanis Morrisette, Matchbox Twenty and for KING & COUNTRY have all faced the monumental task of topping (or at least matching) the popularity and sales figures of their debut album. (CCM newcomer Zach Williams will soon face this challenge, too.) Much of the struggle to do this can be attributed to having only one album with which to compare the new songs to. Even Adele (the closest musical comparison to Lauren Daigle) hit fantastically big on her second album, and was given some time and breathing room to produce her third one.

So where does that leave Look Up Child, Lauren Daigle's much-anticipated follow up album? Debut How Can It Be was the bestselling album of the last few years in CCM, and dominated the radio waves and charts since its release in back in 2014-15 (between the ep, full-length and deluxe album versions).

Well, based on the large shadow cast by the debut, Look Up Child falls a bit short of the massive impact that album had. But listened to on its own merits, Daigle and company have crafted a vintage soul album that sounds fantastic and sports some of the best melodies and performances of any album out this year. Daigle could sing the bark off a tree, and that powerful voice is set against massive string sections and a sharp group of backing musicians.

"Still Rolling Stones" opens the album up in fine, swinging style, but treads a little too close to Adele's "Rolling In The Deep" for comfort. (Even the title is reminiscent of that other song.) Second track "Rescue" slows down the tempo, but builds into a soaring, old-school soul ballad with pleading, emotional vocals and a wonderful backing choir (one that appears a number of times before the album is through). The following "This Girl" continues in this slow-rise pattern, but likewise builds nicely to a barn-burner of a climax. Current single "You Say" continues the string of ballads with a melody that, alas, sounds a lot like Adele's iconic "Someone Like You" in both its melody and performance. Like the "Rolling" opener, both tracks are well-done, and feature great lyrics, but to have two familiar-sounding tunes is a little puzzling.

Thankfully, the ship is righted a bit, and tempos shift on the Reggae-lite "Under Your Wings," which sounds right out of the Bob Marley songbook. Daigle nails the vibe here, and the swinging Caribbean feel is just what is needed to break the mid-tempo spell. The use of the Psalmic metaphor for God's love (that the Lord cares for his children like a mother hen gathers her chicks under her wing for safety) is well-used, and matches the feel of the song wonderfully. The title track is perhaps the best song here, and serves as a pulsating anthem of hope. Again referencing the Psalms, with the instructions to "look up" in times of trouble; the lyrics are poetically rendered in a way that gives hope without being cloying or speaking down to the listener.

That might be Daigle's greatest strength on Look Up Child, the relentless, encouraging, positive drive in the music and lyrics. The theme of hope can be handled in hackneyed fashion in much of Christian music, but Daigle takes her calling seriously, and handles the theme deftly. Ending with the old hymn, "Turn Your Eyes On Jesus," is a great way to bring the album's theme full circle. There may be a few too many slow-rise ballads here, but Look Up Child is a very good follow-up album, and in terms of sheer quality and sophistication, it's also one of the year's best and most mature work.

Lauren Daigle burst onto the scene in 2015 with debut How Can it Be, charting five singles in the process. She was a breath of authentic fresh air to the industry, and quickly established herself as an artist to give your full attention. A success seemingly overnight, she took her time on her follow up, titled Look Up Child, and the listener is treated to more stick-in-your-head pop melodies. Her voice is in fine form as she morphs to the moment, by alternating between tender and soaring vocals. If Adele comparisons were made before, they are even sharper here, especially with the first single, "You Say," and album opener "Still Rolling Stones." Also, everything here sounds bigger than her first album: bigger strings, bigger backing choirs, bigger production. This is not a bad thing; it works well, as there are plenty of slower moments to balance out the thirteen tracks. In fact, if there was a main gripe of the album overall, it's that it's made up of too many slow or mid-tempo tracks. It just feels a little too safely positioned in the sweet spot of what works, and she could benefit from taking a chance or two. The only other thing keeping it from being a truly stellar release for 2018 was the fact that some songs tread a little too closely to the aforementioned artist, Adele. That being said, this is an album that is sure to please fans of her debut, and is likely to bring newcomers to her fan base as well. Highlight songs for this listener are "This Girl," "You Say," "Love Like This," "Look Up, Child," "Losing My Religion," and "Remember." With a deeply personal message to share with listeners, Daigle wants us to know that "this girl ain't going anywhere," and for that we can be thankful. - Review date: 9/4/18, Josh Balogh of Jesusfreakhideout.com

After the compounded success of the How Can It Be EP, the LP, and deluxe edition, Look Up Child was rightfully one of the most widely anticipated albums in Christian music from the past few years. In many ways, the album lives up to the hype--it has strong lead singles in "You Say" and "Still Rolling Stones," showcases Lauren Daigle's wonderful husky voice, and has artistic integrity to boot. While the overall sound is quite pretty (and has great low-end throughout), at times the music and lyrics can be a bit boring or repetitious. That said, Look Up Child is an extremely well executed album and worthy of its potential to be the most commercially successful Christian album of 2018. - 9/13/18 Christopher Smith