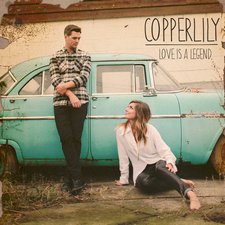 Copperlily
Love Is A Legend EP

We first heard Tim Skipper and Stephanie Smith's voices together on the House of Heroes track, "God Save the Foolish Kings" in 2010. That song was a fan favorite on Suburba, with Stephanie's voice complementing the House of Heroes style and energy perfectly. Apparently, the chemistry went beyond just their voices; Tim and Stephanie were joined together in marriage in November of 2012. Considering the immense talent of both individuals, it only makes sense that they would start making music together. They claim the early collaborations were rough and yielded little results, but that's hard to believe when you listen to Copperlily's Love is a Legend EP. These six songs are all beautiful, graceful, and a real treat to listen to.

The sound here is vastly different than Stephanie's solo work and the majority of the House of Heroes releases. The rock and pop music they perform in their other projects is set aside for a simple, acoustic sound here. While not groundbreaking, it's performed well and always sets the intended tone, particularly on "A Lot to Learn." The vocals frequently bounce back and forth in a very conversational way. Lyrically, the songs are very personal and come across as a behind-the-scenes look at their relationship. Even after a single listen through Love is a Legend, you will feel like you are a part of their story.

Since the album's theme is love, it would be easy to fall into the trap of redundancy. Copperlily mindfully avoids this problem by mixing playful tracks in with the serious and passionate ones. "Map to Your Heart" is a perfect example of the fun, informal atmosphere Copperlily does so well:
Tim: "... I'd swim across an ocean,"
Steph: "That's crazy, baby, you'll be swallowed by the waves,"
Tim: "Well I'd drink Romeo's potion,"
Steph: "What good would it do if you're buried in a grave?"
Tim: "I guess you're right, you're always right"

"A Lot to Learn" puts a couple examples of miscommunication to music. It's an honest, evolving, and often-hilarious take on the work it takes to be with another person. "Broken World" and "Love is a Legend" take a more serious approach. The latter contrasts the concept of everlasting love with life's fleeting pursuits, "Someday I'll stand at Heaven's door and knock, and my soul will thank the Lord that gate unlocks, there's no money, no power, no fame to get me through, love is a legend you can't undo."

Every song sticks tightly to the theme of love, making one wonder how the duo would tackle other subjects. That doesn't diminish the fine work on this EP, however. Copperlily makes a terrific first impression with Love is a Legend, bringing so much charm and warmth that it's tough to resist.